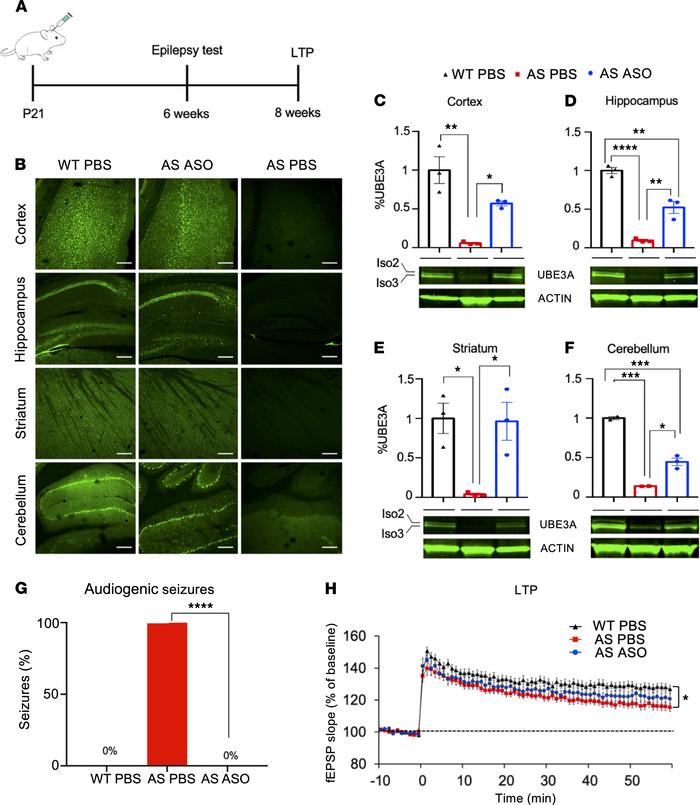 () Schematic representation of the timeline for ASO treatment, epilepsy testing, and LTP measurement. () Three weeks postinjection ( = 2) the brains of WT-PBS, AS-ASO, and AS-PBS mice were stained for UBE3A (green). The brains of AS mice treated with ASO show widely distributed nuclear UBE3A compared with the untreated AS brain. (–) Western blots of lysates obtained 4 weeks after P21 injection of cortex, hippocampus, striatum, and cerebellum of AS mice treated with ASO ( = 3) and compared with age-matched WT controls and AS mice injected with PBS ( = 3). Two bands, representing the cytosolic and nuclear isoforms of UBE3A, can be detected at 100 kDa and ACTIN, here used as loading control, at 45 kDa. One-way ANOVA, followed by Tukey’s post hoc test, was used as statistical test. () Susceptibility to seizures visually observed in AS mice ( = 10) is rescued when treated with ASO at P21 ( = 13). Seizures are also absent in WT mice ( = 9). Fisher exact test was used as statistical test. () LTP measurement in AS mice treated with ASO (blue line), WT mice (black line), and AS mice (red line). Two-way ANOVA, followed by Bonferroni’s correction, was used as the statistical test. Number of slices used/mouse: AS-PBS ( = 26/5); AS-ASO ( = 27/7); WT-PBS ( = 23/4). Scale bars: 200 μm (). Data are represented as means ± SEM. values represent the significance level for the parameter and are displayed as stars in the figure: not shown if > 0.05, * ≤ 0.05, ** ≤ 0.01, *** ≤ 0.001, **** ≤ 0.0001.