To investigate the nationwide severe fever with thrombocytopenia syndrome virus (SFTSV) infection status, we isolated SFTSVs from severe fever with thrombocytopenia syndrome (SFTS)-suspected patients in 207 hospitals throughout South Korea between 2013 and April of 2017. A total of 116 SFTSVs were isolated from 3,137 SFTS-suspected patients with an overall 21.6% case fatality rate. Genetic characterization revealed that at least six genotypes of SFTSVs are co-circulating in South Korea with multiple reassortments among them. Of these, the genotype B-2 strains were the most prevalent (n = 48, 36.1%) followed by the A and F genotypes. Clinical and epidemiologic investigations revealed that genotype B strains were associated with the highest case-fatality rate (34.8%, 32/92), while genotype A caused only one fatality out of ten patients. Further, ferret infection studies demonstrated varied clinical manifestations and case mortality rates of different strains of SFTSV, which suggests this virus could exhibit genotype-dependent pathogenicity.Keywords: severe fever with thrombocytopenia syndrome virus (SFTSV), clinical manifestations, genotypes, pathogenesis 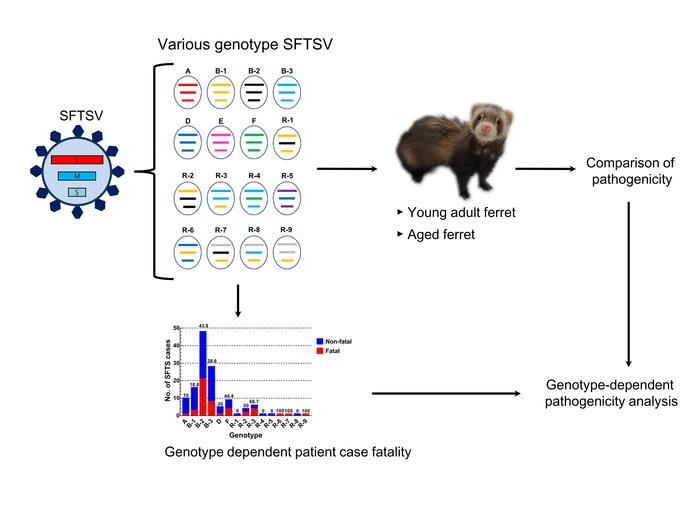