Diabetic foot ulcers (DFUs) are a life-threatening disease that often results in lower limb amputations and a shortened life span. Current treatment options are limited and often not efficacious, raising the need for new therapies. To investigate the therapeutic potential of topical statins to restore healing in patients with DFUs, we performed next-generation sequencing on mevastatin-treated primary human keratinocytes. We found that mevastatin activated and modulated the EGF signaling to trigger an antiproliferative and promigratory phenotype, suggesting that statins may shift DFUs from a hyperproliferative phenotype to a promigratory phenotype in order to stimulate healing. Furthermore, mevastatin induced a migratory phenotype in primary human keratinocytes through EGF-mediated activation of Rac1, resulting in actin cytoskeletal reorganization and lamellipodia formation. Interestingly, the EGF receptor is downregulated in tissue biopsies from patients with DFUs. Mevastatin restored EGF signaling in DFUs through disruption of caveolae to promote keratinocyte migration, which was confirmed by caveolin-1 (Cav1) overexpression studies. We conclude that topical statins may have considerable therapeutic potential as a treatment option for patients with DFUs and offer an effective treatment for chronic wounds that can be rapidly translated to clinical use. 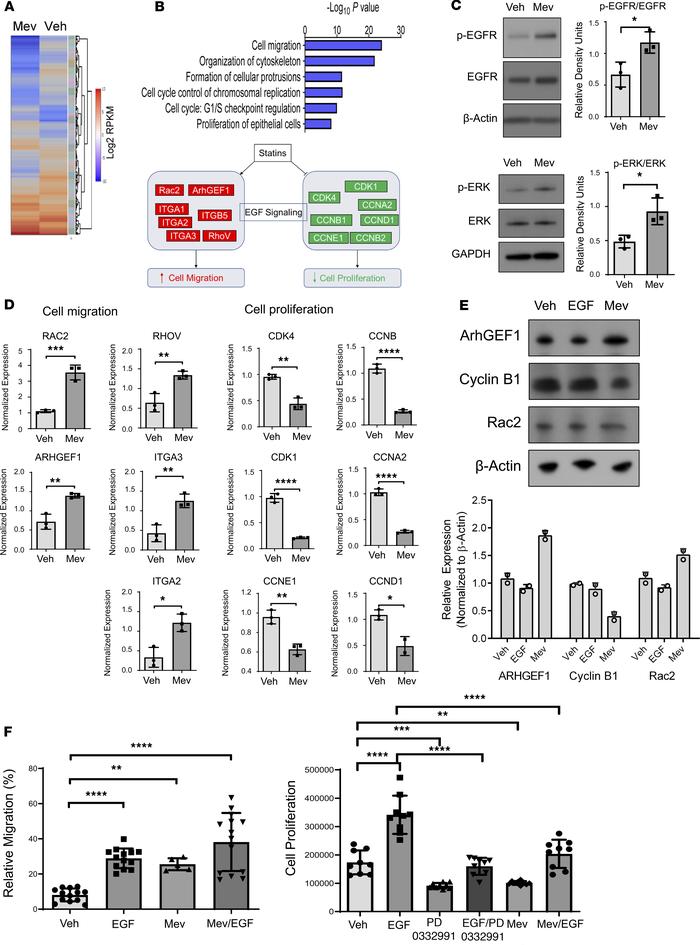