Find articles by He, C. in: JCI | PubMed | Google Scholar

Find articles by Longhini, A. in: JCI | PubMed | Google Scholar

Find articles by Carter, A. in: JCI | PubMed | Google Scholar | 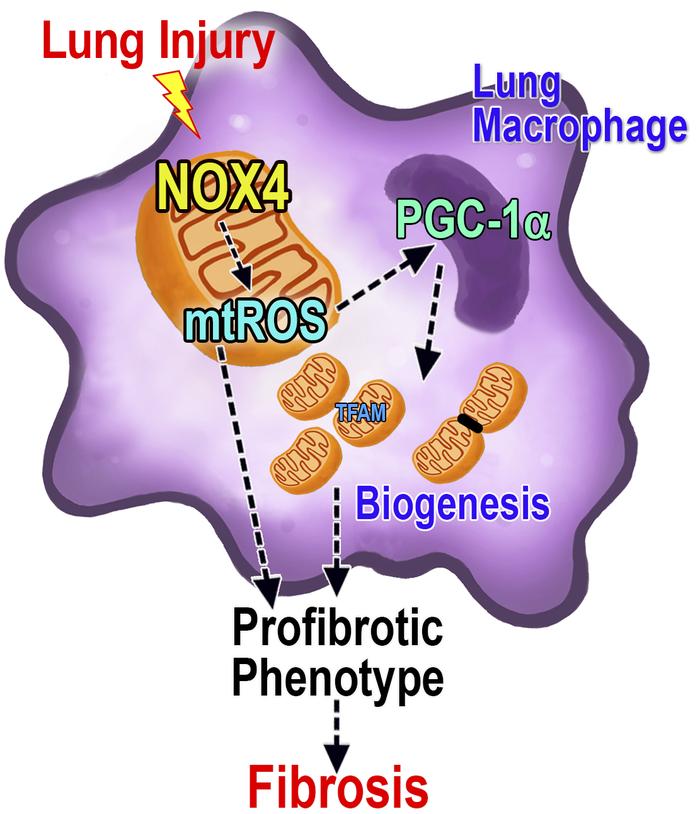 Macrophages are believed to contribute to various fibrotic disease processes by increasing the generation of profibrotic cytokines and production of collagen synthesis substrates, such as proline, and molecules implicated in extracellular matrix dynamics (1). Macrophages produce high levels of ROS, including H2O2, which has a critical role in the pathogenesis of pulmonary fibrosis (2). We have shown that mitochondrial ROS production can promote profibrotic polarization of macrophages (3–5).

NADPH oxidase 4 (NOX4) belongs to a family of enzymes named nicotinamide adenine dinucleotide phosphate hydrogen (NADPH) oxidases, whose primary function is catalyzing the reduction of oxygen to superoxide anion free radicals (6). NOX enzymes are located primarily within the cell or phagosome membranes; however, NOX4 is localized in mitochondria (7, 8). Another unique property of NOX4 is that it generates H2O2 in addition to superoxide radicals. Previous studies indicate that NOX4 contributes to pulmonary fibrosis development because NOX4 expression is elevated in whole lung homogenates after bleomycin exposure (9, 10). Additionally, administration of NOX4 siRNA intratracheally after bleomycin exposure attenuates fibrogenesis. The effect of NOX4 on fibrosis development has been proposed to be mediated by its effects on fibroblast activation and alveolar epithelial cell apoptosis. The effects of NOX4 in myeloid cells in fibrotic repair are not known.

To validate these observations in vivo, WT and Nox4–/– mice were exposed to chrysotile asbestos intratracheally. Nox4–/– mice were protected from developing fibrosis and had significantly decreased collagen deposition compared with WT mice (Figure 1, D and E). To determine the effect of NOX4 specifically in macrophages, we generated mice harboring a deletion of NOX4 in macrophages (Nox4–/–Lyz2-Cre). The predominant cell type in the bronchoalveolar lavage (BAL) fluid on day 21 was macrophages (Supplemental Figure 1D). Nox4–/–Lyz2-Cre mice were protected from developing pulmonary fibrosis and had less collagen content, similar to the MMVF control (Figure 1, F and G). Nox4–/–Lyz2-Cre mice lacked NOX4 expression in lung macrophages (Figure 1G, inset) but not in alveolar epithelial cells (Supplemental Figure 1E).

Recent data have highlighted a role of monocyte-derived macrophages in the development of pulmonary fibrosis (15). Using flow cytometry (Supplemental Figure 1F), we found an increased number of monocyte-derived macrophages (MDMs) after asbestos exposure in Nox4fl/fl mice, whereas the number of tissue-resident macrophages (TRMs) decreased (Figure 1, H and I). The number of MDMs and TRMs remained unchanged after asbestos exposure in the Nox4–/–Lyz2-Cre mice (Figure 1, H and I), suggesting one potential mechanism by which these mice are protected from asbestos-induced pulmonary fibrosis.

To highlight the importance of MDMs, liposomal clodronate (clodrosome) was administered intratracheally to deplete TRMs as previously described (15). Three days after clodrosome treatment, most of the TRMs were depleted (Supplemental Figure 1G). Clodrosome treatment does not alter the course of fibrosis development in asbestos-exposed mice, suggesting that MDMs, not TRMs, are the main driver for fibrosis (Supplemental Figure 1H). Together, these data demonstrate that NOX4 in lung macrophages, particularly MDMs, has a critical role in fibrotic repair and that targeting NOX4 may protect from fibrosis development.

Based on the regulation of mitochondrial ROS and membrane potential, we questioned whether mitochondrial bioenergetics was similarly regulated by NOX4. Lung macrophages from asbestos-injured WT mice had a significant increase in oxygen consumption compared with MMVF-treated WT mice, whereas the Nox4–/– macrophages had reduced oxygen consumption to the level of the WT control, regardless of asbestos exposure (Figure 4, F–H). Interestingly, the Nox4–/– macrophages had increased extracellular acidification rate (ECAR) compared with WT macrophages, suggesting a potential shift of metabolism toward glycolysis in the absence of NOX4 (Supplemental Figure 4A).

Fusion, fission, and division are mechanisms for mitochondrial biogenesis (24). Mdivi-1, a chemical compound that selectively inhibits dynamin-related GTPase (Drp-1), has been investigated in preclinical trials for neurodegenerative disease, myocardial infarction, and cancer (25–27); however, the involvement of Drp-1 in fibrotic repair is not known. Phosphorylated Drp-1 was significantly greater in mitochondria from subjects with asbestosis compared with those from normal subjects (Figure 6D). These data suggest that mitochondrial biogenesis occurs by fission rather than fusion because Mfn-2 was decreased in lung macrophages from subjects with asbestosis (data not shown). This was supported by showing that Mdivi-1 decreased PGC-1α expression significantly to the level in the vehicle-treated macrophages (Figure 6E), suggesting that Mdivi-1 can inhibit mitochondrial biogenesis.

Lung macrophages are an important source of ROS during pulmonary fibrosis. It is known that macrophage NOX4 expression is increased in conditions characterized by increased oxidative stress, such as atherosclerosis, diabetes, and chronic alcohol abuse (32–34). Targeting NOX4 in monocytes/macrophages and reducing NOX4-mediated ROS production is known to be protective in several disease conditions, such as cardiac ischemia/reperfusion injuries, diabetes, and Streptococcus pneumoniae infection (8, 35, 36). Here, we show that NOX4-derived ROS are critical for profibrotic cytokine production, and reducing ROS production by deleting NOX4 in macrophages can decrease profibrotic polarization. Recent studies suggest that there are many potential contacts between NOX4 and critical mitochondrial components (28, 29, 37). In addition to the proposed interaction between NOX4 and mitochondrial complex I subunits previously described, ATP can directly bind to NOX4 and negatively regulate its activity in normal renal epithelial cells and renal carcinoma cells (37); however, our data demonstrate that ATP production is NOX4 dependent.

Macrophages are highly plastic and will program into different phenotypes in various disease conditions. Profibrotic macrophages increase the generation of profibrotic cytokines and provide substrate for collagen synthesis. Targeting this macrophage phenotype has been examined in several preclinical studies to reduce or prevent pulmonary fibrosis (3–5, 38–40). A prior study showed that NOX4 was decreased in iPLA2β−/− macrophages, which harbor a profibrotic phenotype (41). We are the first to our knowledge to show that NOX4 mediates macrophage polarization to a profibrotic phenotype, as we observed in human subjects with lung fibrosis and in our murine model.

Recent advances in the field have highlighted the key role of MDMs in promoting fibrosis (15, 42), and increasing circulating monocyte counts have been shown to be a poor prognostic indicator in pulmonary fibrosis (43). Our data support the notion that MDMs are crucial in aberrant repair because there are increased numbers of MDMs in the lungs of mice developing fibrosis. Although the mechanism of the recruitment was not determined here, several studies have shown monocyte chemoattractant protein 1 production from AECII is responsible for the increase in monocytic cells in BAL after injury (44, 45); however, the mechanism of recruitment in asbestos-induced injury warrants further investigation.

Mice. Nox4–/–Lyz2-Cre mice were generated by selective disruption of Nox4 gene in the cells of the granulocyte/monocyte lineage by crossing Nox4fl/fl mice with mice containing a Cre recombinase under the control of the lysozyme M promoter. The Nox4–/– mice have been previously described (10). Mice were intratracheally administered 100 μg of chrysotile asbestos suspended in 50 μL 0.9% saline solution after being anesthetized with 3% isoflurane using a precision Fortec vaporizer (Cyprane). Mice were euthanized at the designated day after exposure with an overdose of isoflurane, and BAL was performed. Bone marrow cells were isolated and incubated in L929 cell–conditioned medium (generated in-house) for 7 days to generate macrophages. The lungs were removed and stained for collagen fibers using Masson’s trichrome stain.

Plasmids and transfections. Human NOX4 cDNA was subcloned into pcDNA3.1 between the KpnI (5′) and NotI (3′) sites. Plasmid vectors were transfected into cells using X-tremeGene 9 transfection reagent (Roche), according to the manufacturer’s instructions.

Measurement of mitochondrial membrane potential. Cells were loaded with JC-1 dye (Molecular Probes) at a final concentration of 10 μg/mL for 15 minutes at 37°C. Cells were imaged using Zeiss LSM 710 confocal microscope, and all images were taken at the same time using the same imaging settings.

NADH and NAD+ measurement. The measurement was performed with the Fluorimetric NADH/NAD+ Ratio Assay Kit (AAT Bioquest 15263), based on the manufacturer’s instructions.

Hydroxyproline determination. Lung tissue was dried and digested for 24 hours at 112°C with 6N hydrochloric acid. Hydroxyproline concentration was determined as previously described (5).

ELISA. Active TGF-β and Ym-1 levels in BAL fluid and cell media were measured by ELISA (R&D Systems), according to the manufacturer’s instructions.

Statistics. Statistical comparisons were performed as indicated in the figure legends and include the 2-tailed t test or 1-way ANOVA followed by Tukey’s multiple-comparisons test. Values in figures are expressed as means ± SEM, and P value less than 0.05 was considered significant.

Study approval. We obtained human lung macrophages, as previously described (20), from normal and asbestosis subjects under an approved protocol (no. 300001124) by the Human Subjects Review Board of the University of Alabama at Birmingham. All patients provided prior written consent to participate in the study.

All animal protocols were approved (protocol 21149) by the University of Alabama at Birmingham Institutional Animal Care and Use Committee.

NIH grants R01ES015981-11 and 1R56ES027464-01 (to ABC) and 5T32HL105346 (to VJT and CH) and a Merit Review from the Department of Veterans Affairs, Veterans Health Administration, Office of Research and Development, Biomedical Laboratory Research and Development I01CX001715 (to ABC) supported this work. Support for the Comprehensive Flow Cytometry Core was provided by NIH P30AR048311 and NIH P30AI27667. The authors thank Edward Philips and Melissa Foley-Chimento and the University of Alabama at Birmingham High Resolution Imaging Facility for assistance with TEM.