Gut microbiota–derived metabolites play important roles in health and disease. D–amino acids and their L-forms are metabolites of gut microbiota with distinct functions. In this study, we show the pathophysiologic role of D–amino acids in association with gut microbiota in humans and mice with acute kidney injury (AKI). In a mouse kidney ischemia/reperfusion model, the gut microbiota protected against tubular injury. AKI-induced gut dysbiosis contributed to the altered metabolism of D–amino acids. Among the D–amino acids, only D-serine was detectable in the kidney. In injured kidneys, the activity of D–amino acid oxidase was decreased. Conversely, the activity of serine racemase was increased. The oral administration of D-serine mitigated the kidney injury in B6 mice and D-serine–depleted mice. D-serine suppressed hypoxia-induced tubular damage and promoted posthypoxic tubular cell proliferation. Finally, the D-serine levels in circulation were significantly correlated with the decrease in kidney function in AKI patients. These results demonstrate the renoprotective effects of gut-derived D-serine in AKI, shed light on the interactions between the gut microbiota and the kidney in both health and AKI, and highlight D-serine as a potential new therapeutic target and biomarker for AKI. 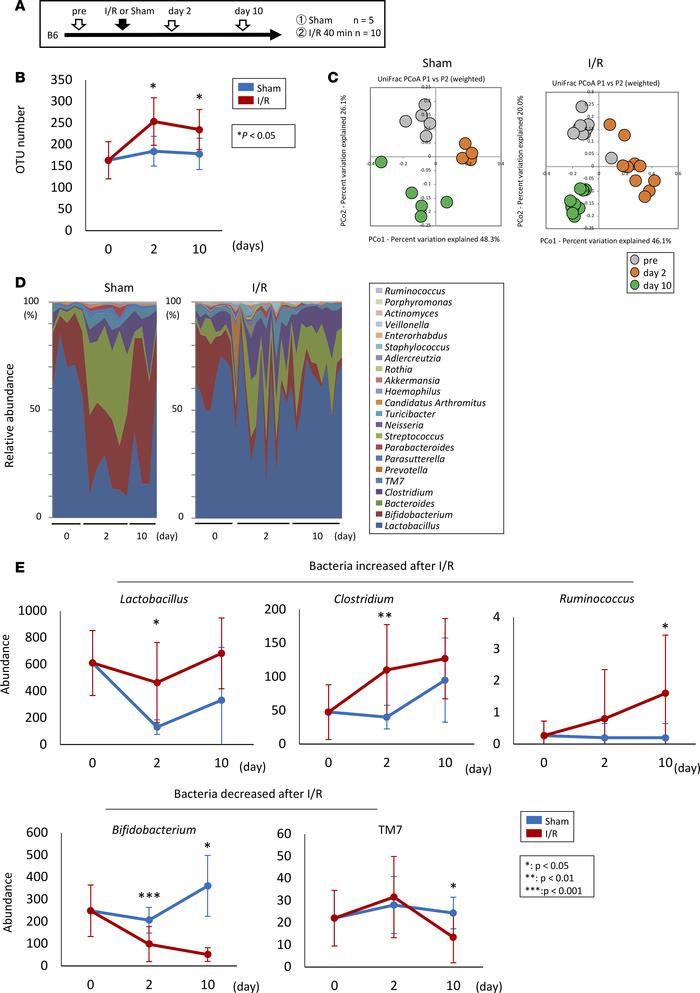 () The protocol for I/R injury in mouse kidney. () Comparison of species richness between the gut microbiota in the I/R-injured and the sham-operated mice. () Principal coordinate analyses (PCoAs) based on the weighted UniFrac analysis of the bacterial community structures before the induction of I/R (pre) and on days 2 and 10. ( and ) Comparison of the bacterial composition () and the abundance of several species () between the I/R-injured and the sham-operated mice before I/R and days 2 and 10. Data are presented as mean ± SEM. Statistical analysis was performed using Student’s test ( and ). * < 0.05, ** < 0.01, *** < 0.001. OTU, operational taxonomic unit.