Degenerative cervical myelopathy (DCM) is the most common progressive nontraumatic spinal cord injury. The most common recommended treatment is surgical decompression, although the optimal timing of intervention is an area of ongoing debate. The primary objective of this study was to assess whether a delay in decompression could influence the extent of ischemia-reperfusion injury and alter the trajectory of outcome in DCM. Using a DCM mouse model, we show that decompression acutely led to a 1.5- to 2-fold increase in levels of inflammatory cytokines within the spinal cord. Delayed decompression was associated with exacerbated reperfusion injury, astrogliosis, and poorer neurological recovery. Additionally, delayed decompression was associated with prolonged elevation of inflammatory cytokines and an exacerbated peripheral monocytic inflammatory response (P < 0.01 and 0.001). In contrast, early decompression led to resolution of reperfusion-mediated inflammation, neurological improvement, and reduced hyperalgesia. Similar findings were observed in subjects from the CSM AOSpine North America and International studies, where delayed decompressive surgery resulted in poorer neurological improvement compared with patients with an earlier intervention. Our data demonstrate that delayed surgical decompression for DCM exacerbates reperfusion injury and is associated with ongoing enhanced levels of cytokine expression, microglia activation, and astrogliosis, and paralleled with poorer neurological recovery. 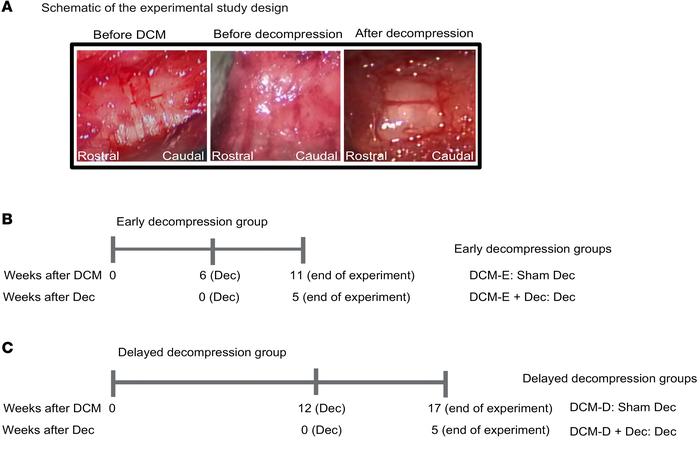