Transplantation of human skin microbiota in models of atopic dermatitis

Transplantation of human skin microbiota in models of atopic dermatitis

Atopic dermatitis (AD) is characterized by reduced barrier function, reduced innate immune activation, and susceptibility to . Host susceptibility factors are suggested by monogenic disorders associated with AD-like phenotypes and can be medically modulated. . contributes to AD pathogenesis and can be mitigated by antibiotics and bleach baths. Recent work has revealed that the skin microbiome differs significantly between healthy controls and patients with AD, including decreased Gram-negative bacteria in AD. However, little is known about the potential therapeutic benefit of microbiome modulation. To evaluate whether parameters of AD pathogenesis are altered after exposure to different culturable Gram-negative bacteria (CGN) collected from human skin, CGN were collected from healthy controls and patients with AD. Then, effects on cellular and culture-based models of immune, epithelial, and bacterial function were evaluated. Representative strains were evaluated in the MC903 mouse model of AD. We found that CGN taken from healthy volunteers but not from patients with AD were associated with enhanced barrier function, innate immunity activation, and control of . . Treatment with CGN from healthy controls improved outcomes in a mouse model of AD. These findings suggest that a live-biotherapeutic approach may hold promise for treatment of patients with AD.

CGN isolates differ in presence and 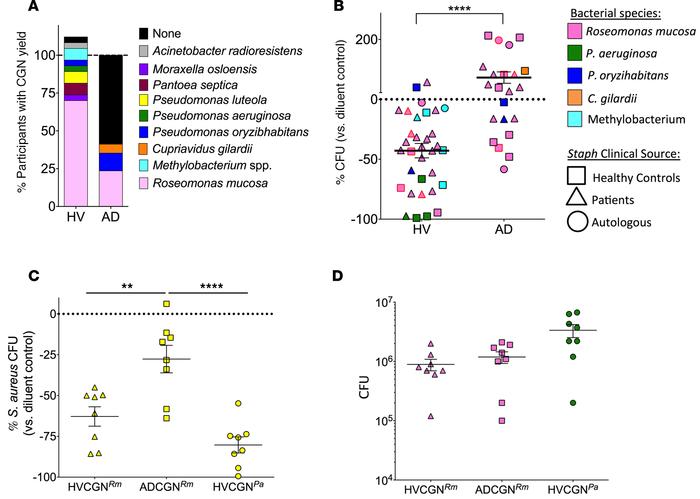 () Percentage of individuals with CGN isolate yield from HV ( = 26) and AD ( = 17) subjects. Individuals with multiple CGN isolates were counted per isolate for >100% total in HV; see for details. () Eight strains of . isolated from HV and AD patients were grown in the presence of either CGN supernatant or control media. Each data point represents the effect on . growth of supernatant from one CGN isolate compared with media control (HV isolates = 9, AD isolates = 7); shapes represent sourcing of . as either the participant’s autologous . or one . isolate from HV or AD patients. Data points with red outline represent one HV- and one AD-derived CGN isolate selected for subsequent human challenge and mouse model experiments. Data are alternatively presented by CGN species in . () Healthy mouse ears were coinoculated with . (strain SAAS9) and . from HV or AD patients or . from a HV for 10 days. Day 12 ears were homogenized and plated by serial dilution for CFU. Percentage change in growth versus diluent (no CGN added) control is shown. () CGN CFU yield taken from same mice as in . Data shown are a combination of 3 or more independent experiments () or representative of two independent experiments ( and ) and displayed as mean + SEM. HV, healthy volunteer; AD, atopic dermatitis; CGN, culturable Gram-negative; Rm, . ; Pa, . . Significance determined by Student’s test () or ANOVA with Bonferroni’s correction ( and ). ** < 0.01, **** < 0.0001.