Pancreatic ductal adenocarcinoma (Pdac) is a malignancy with a poor prognosis due to difficulties in early detection. Although promising biomarkers are increasingly reported, such methods are not yet easy to apply clinically, mainly due to their low reproducibility or technical difficulties. In this study, we developed a convenient and sensitive method for quantifying aberrantly expressed satellite repeat RNAs in sera, which can be used to efficiently detect patients with Pdac. Here, we introduce a Tandem Repeat Amplification by nuclease Protection (TRAP) method combined with droplet digital PCR (ddPCR) to detect human satellite II (HSATII) RNAs, which are specifically expressed in human Pdacs at greater levels than normal tissues but are difficult to measure due to their repetitive sequences and irregularities. HSATII RNA core sequence levels in sera were significantly higher in Pdac patients compared with noncancer patients (median copy number: 14.75 and 3.17 per μl in the training set and 17.35 and 2.9 in the validation set, respectively). In addition, patients with intraductal papillary mucinous neoplasm (IPMN), a precancerous lesion of Pdac, could also be efficiently detected. This method can be routinely applied to screen patients with Pdac and high-risk patients, facilitating the development of preventive medicine for this disease. 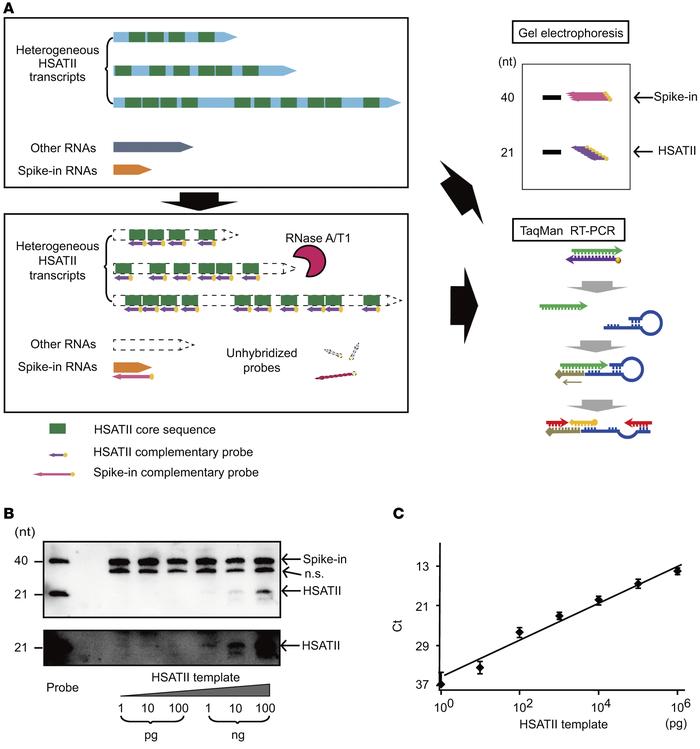 () Conceptual scheme of the tandem repeat amplification with nuclease protection (TRAP) method. Human satellite II (HSATII) RNAs are heterogeneous transcripts containing random repeats of the core sequences (upper panel). After hybridizing complementary probes to the core sequences, single-stranded RNAs including unhybridized probes are digested by nuclease A and T1 (lower panel). Protected core sequences can be accumulated and visualized by gel electrophoresis or quantified by TaqMan reverse transcription PCR (RT-PCR, right panels). () Detection of synthesized HSATII transcripts by gel electrophoresis after the TRAP method. Ten-fold serial dilutions from 1 pg to 100 ng of HSATII templates were examined. Spike-in probes were used as normalized controls and were detected at the size of 40 nucleotides (nt) and HSATII probes at the level of 21 nt. The lower panel shows high-contrast images of the bands of HSATII RNA in the upper panel. n.s., nonspecific bands. () A standard curve reflecting the accurate quantitation of the synthesized HSATII transcripts. Serial dilutions from 1 pg to 1 μg of HSATII RNA templates were quantified by TaqMan real-time PCR after performing the TRAP method. The standard curve is shown as a black line. Data represent the mean ± SD of 3 independent experiments.