Carriers of the hydroxysteroid 17-β dehydrogenase 13 (HSD17B13) gene variant (rs72613567:TA) have a reduced risk of NASH and cirrhosis but not steatosis. We determined its effect on liver histology, lipidome, and transcriptome using ultra performance liquid chromatography-mass spectrometry and RNA-seq. In carriers and noncarriers of the gene variant, we also measured pathways of hepatic fatty acids (de novo lipogenesis [DNL] and adipose tissue lipolysis [ATL] using 2H2O and 2H-glycerol) and insulin sensitivity using 3H-glucose and euglycemic-hyperinsulinemic clamp) and plasma cytokines. Carriers and noncarriers had similar age, sex and BMI. Fibrosis was significantly less frequent while phospholipids, but not other lipids, were enriched in the liver in carriers compared with noncarriers. Expression of 274 genes was altered in carriers compared with noncarriers, consisting predominantly of downregulated inflammation-related gene sets. Plasma IL-6 concentrations were lower, but DNL, ATL and hepatic insulin sensitivity were similar between the groups. In conclusion, carriers of the HSD17B13 variant have decreased fibrosis and expression of inflammation-related genes but increased phospholipids in the liver. These changes are not secondary to steatosis, DNL, ATL, or hepatic insulin sensitivity. The increase in phospholipids and decrease in fibrosis are opposite to features of choline-deficient models of liver disease and suggest HSD17B13 as an attractive therapeutic target.

Decreased hepatic inflammation in carriers of the HSD17B13 rs72613567 variant. 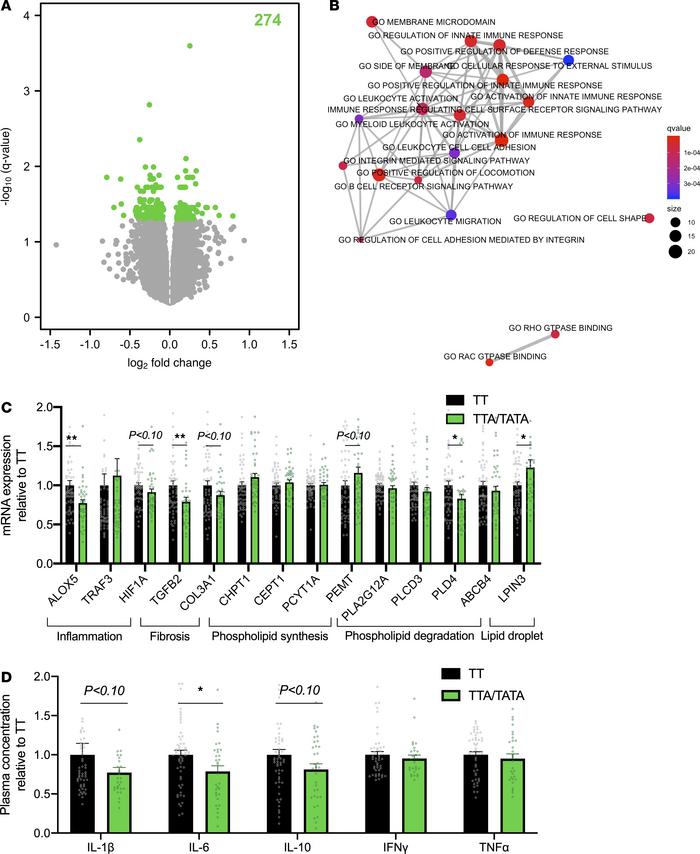