Impaired insulin secretion in type 2 diabetes (T2D) is linked to reduced insulin granule docking, disorganization of the exocytotic site, and impaired glucose-dependent facilitation of insulin exocytosis. We show in β cells from 80 human donors that the glucose-dependent amplification of exocytosis is disrupted in T2D. Spatial analyses of granule fusion events, visualized by total internal reflection fluorescence microscopy in 24 of these donors, demonstrated that these events are nonrandom across the surface of β cells from donors with no diabetes. The compartmentalization of events occurs within regions defined by concurrent or recent membrane-resident secretory granules. This organization, and the number of membrane-associated granules, is glucose dependent and notably impaired in T2D β cells. Mechanistically, multichannel Kv2.1 clusters contribute to maintaining the density of membrane-resident granules and the number of fusion “hotspots,” while SUMOylation sites at the channel N- (K145) and C-terminus (K470) determine the relative proportion of fusion events occurring within these regions. Thus, a glucose-dependent compartmentalization of fusion, regulated in part by a structural role for Kv2.1, is disrupted in β cells from donors with T2D.

Spatial compartmentalization of granule fusion is reduced in T2D. 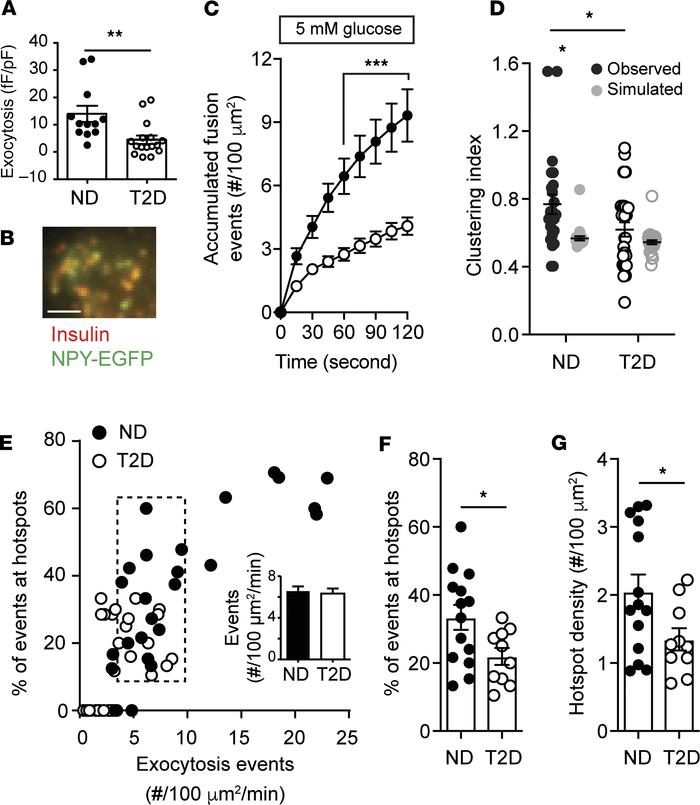 () Exocytosis, measured by patch-clamp in a subset of donors at 5 mM glucose, demonstrates impaired function in T2D ( = 12 and 16 cells from 3 ND and 3 T2D donors, respectively). ( and ) In β cells expressing NPY-EGFP, which colocalizes with insulin by immunostaining, fusion events were monitored by TIRF microscopy also at 5 mM glucose (ND, black circles, = 16 cells from 5 donors; T2D, open circles, = 26 cells from 6 donors). Scale bar: 2 μm. () Uniform index of events from calculated (black) from Voronoi polygon areas and compared with random simulations (gray). () Scatter plot of total fusion events versus the proportion that occur within clusters. A subset of cells (dashed box) with equivalent exocytosis (inset) were selected for further analysis. () The proportion of events occurring in spatially defined clusters. () The density of these clusters. Significance was determined ( and ) by Student’s test, () by ANOVA and Bonferroni’s posttest, or ( and ) by Kruskal-Wallis 1-way ANOVA followed by Mann-Whitney posttest. * < 0.05; ** < 0.01; *** < 0.001.