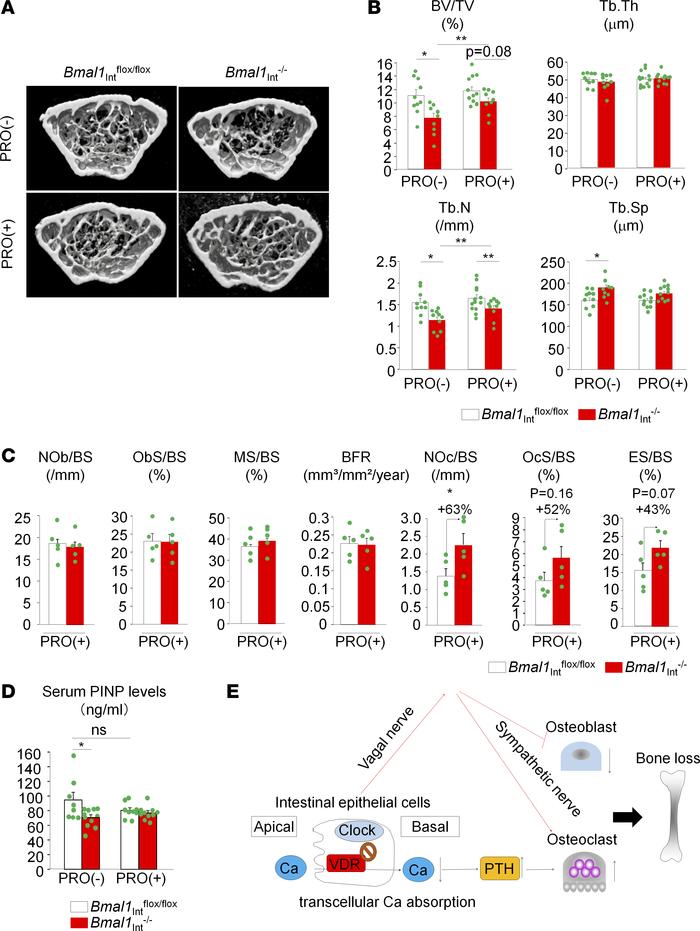 ( and ) μCT analysis of the femur was performed to analyze the trabecular bone microarchitecture of 16-week-old mice treated with or without propranolol (PRO). A representative μCT image () and the parameters of the μCT analysis are shown () ( = 10–13). * < 0.01, ** < 0.05 by 1-way ANOVA. () Dynamic histomorphometric data of 16-week-old mice treated with PRO ( = 5). * < 0.05 by Student’s test. The difference in the values of bone resorption markers between control and Int–/– mice in the presence of PRO is shown, and this is smaller than those in the absence of PRO (see ). () Serum levels of P1NP were determined at ZT2 ( = 8–11). () Schematic model of the effects of the clock network in the intestines on skeletal metabolism. The lack of in the intestines blunts the Clock-mediated activation of VDR transcriptional activity, which results in decreases in transcellular Ca absorption. This leads to osteoclastic activation and bone loss. Additionally, sympathetic tone is activated through afferent vagal nerves when is deleted in the intestines, which leads to bone loss through the suppression of bone formation and stimulation of bone resorption.