Molecular mechanisms that control leukocyte migration across the vascular endothelium (transendothelial migration; TEndoM) have been extensively characterized in vivo, but details of leukocyte transepithelial migration (TEpM) and its dysregulation (a pathologic feature of many mucosal diseases) are missing due to the lack of suitable animal models. Here, we describe a murine model that utilizes a vascularized proximal colonic segment (pcLoop) and enables quantitative studies of leukocyte trafficking across colonic epithelium. Consistent with previous in vitro studies, intraluminal injection of antibodies against integrin CD11b/CD18 reduced recruitment of polymorphonuclear neutrophils (PMN) into the lumen of pcLoops, and it increased subepithelial accumulation of PMN. We extended studies using the pcLoop to determine contributions of Junctional Adhesion Molecule-A (JAM-A, or F11R) in PMN TEpM and confirmed that mice with total loss of JAM-A or mice with intestinal epithelial selective loss of JAM-A had increased colonic permeability. Furthermore, there was reduced PMN migration into the colonic lumen that paralleled subepithelial accumulation of PMN in global-KO mice, as well as in intestinal epithelial-targeted JAM-A–deficient mice. These findings highlight a potentially novel role for JAM-A in regulating PMN TEpM in vivo and demonstrate utility of this model for identifying receptors that may be targeted in vivo to reduce pathologic intestinal inflammation. 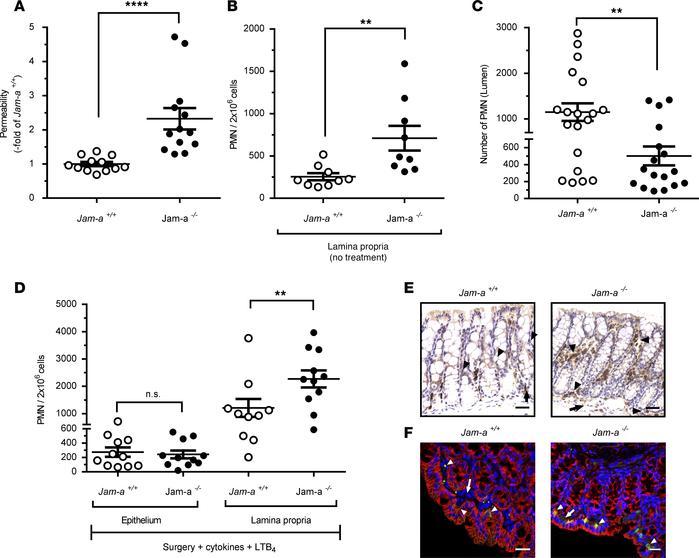