Allogeneic hematopoietic cell transplantation (alloHCT) is a potentially curative treatment for myelodysplastic syndromes (MDS), but patients who relapse after transplant have poor outcomes. In order to understand the contribution of tumor clonal evolution to disease progression,we applied exome and error-corrected targeted sequencing coupled with copy number analysis to comprehensively define changes in the clonal architecture of MDS in response to therapy using 51 serially acquired tumor samples from 9 patients who progressed after an alloHCT. We show that small subclones before alloHCT can drive progression after alloHCT. Notably, at least one subclone expanded or emerged at progression in all patients. Newly acquired structural variants (SVs) were present in an emergent/expanding subclone in 8 of 9 patients at progression, implicating the acquisition of SVs as important late subclonal progression events. In addition, pretransplant therapy with azacitidine likely influenced the mutation spectrum and evolution of emergent subclones after alloHCT. Although subclone evolution is common, founding clone mutations are always present at progression and could be detected in the bone marrow as early as 30 and/or 100 days after alloHCT in 6 of 8 (75%) patients, often prior to clinical progression. In conclusion, MDS progression after alloHCT is characterized by subclonal expansion and evolution, which can be influenced by pretransplant therapy. 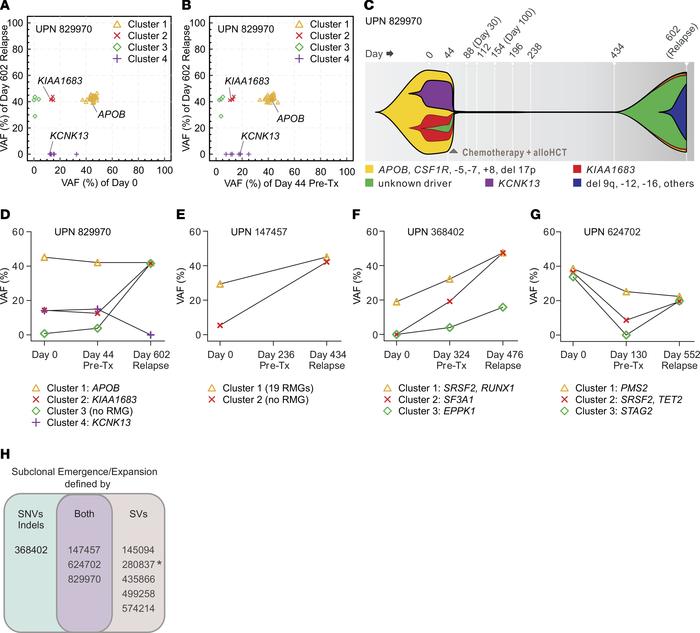 The variant allele fractions (VAFs) of all validated mutations in diploid genomic regions for UPN 829970 at relapse were compared with those at first sampling (day 0) () and before transplant (). Genes known to be recurrently mutated in myeloid malignancies (RMG) are labeled. Unsupervised clustering of individual mutation VAFs (e.g., SNVs and indels) identified 4 clones, including one that expanded (green, cluster 3) and one that contracted (purple, cluster 4) at progression. Cluster 1 (founding clone) mutations were always detectable at progression. () Summary of clonal evolution from first sampling (day 0) to relapse in UPN 829970. The founding clone contained cluster 1 mutations (yellow) that were present in approximately 90% of bone marrow cells at first sampling (day 0). Clone 1 gave rise to 2 subclones, as shown (cluster 2 mutations in red, 29% of cells; cluster 4 mutations in purple, 28% of cells). The subclone containing cluster 2 mutations gave rise to a rare, pretransplant subclone (cluster 3 mutations, green) that expanded and gained additional SVs to become the most abundant subclone at relapse, present in 83% of cells. Selected somatic alterations, some copy number corrected, are shown. Days are numbered relative to first sampling, and selected after transplant days are shown in parentheses. VAFs represent the summation of read counts from exome and standard validation sequencing when available. () Dynamic changes in the size of the clones in 4 subjects with expanding/emerging clones defined by SNVs/indels in diploid areas of the genome. The RMG associated with each cluster is labeled and, in some cases, copy number corrected, with the exception of data in , due to space constraints (see ). () Summary of the type of somatic alteration associated with expanding or emerging subclones at progression after transplant. SNV, single nucleotide variant; indels, insertion or deletion; SV, structural variant; RMG, recurrently mutated gene. A indel was also detected in UPN 280837 but was not able to be accurately quantified (marked with an asterisk).