Mechanical injury to the brain triggers multiple biochemical events whose specific contributions to the pathogenesis define clinical manifestations and the overall outcome. Among many factors, mitochondrial injury has recently attracted much attention due to the importance of the organelle for bioenergetics as well as intra- and extracellular signaling and cell death. Assuming the essentiality of a mitochondria-unique phospholipid, cardiolipin (CL), for the structural and functional organization of mitochondria, here we applied global (phospho) lipidomics and redox lipidomics to reveal and identify CL modifications during controlled cortical impact (CCI). We revealed 2 major pathways activated in the CCI-injured brain as time-specific responses: early accumulation of oxidized CL (CLox) products was followed by hydrolytic reactions yielding monolyso-CLs (mCLs) and free fatty acids. To quantitatively assess possible specific roles of peroxidation and hydrolysis of mitochondrial CL, we performed comparative studies of CL modifications using an animal model of Barth syndrome where deficiency of CL reacylation (Tafazzin [Taz] deficiency) was associated exclusively with the accumulation of mCLs (but not CLox). By comparing the in vitro and in vivo results with genetic manipulation of major CL-, CLox-, and mCL-metabolizing enzymes, calcium-independent phospholipase A2γ and Taz, we concluded that the 2 processes — CL oxidation and CL hydrolysis — act as mutually synergistically enhancing components of the pathogenic mechanism of mitochondrial injury in traumatic brain injury. This emphasizes the need for combined therapeutic approaches preventing the formation of both CLox and mCL.

Time course analysis of CL profile in the brain after TBI by LC-MS. 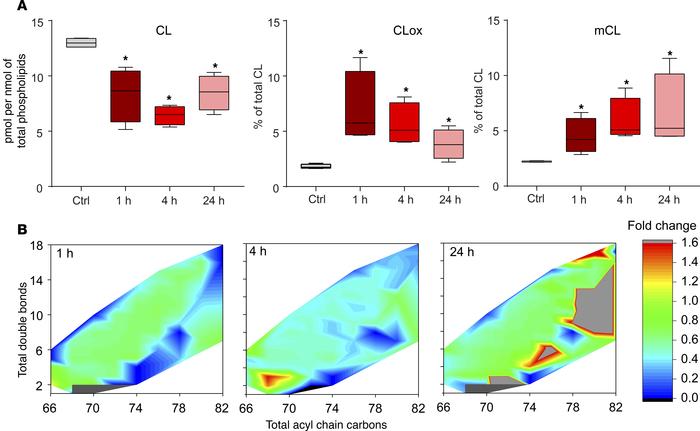 () Quantitative assessment by LC-MS of total CL, CLox, and mCL content in the contusional cortex at 1, 4, and 24 hours after controlled cortical impact (CCI). = 4/group, * < 0.05 vs. control, 1-way ANOVA. The box plots depict the minimum and maximum values (whiskers), the upper and lower quartiles, and the median. The length of the box represents the interquartile range. () Color contour map showing changes in CL species at 1, 4, and 24 hours with respect to control. Values are average from 4 animals.