Using a mouse retroviral model, we have shown that mAb-based immunotherapy can induce life-long endogenous protective immunity (vaccine-like effects). This observation has potentially important consequences for treating life-threatening human viral infections. Here, we investigated the role of neutrophils in this effect. Neutrophils are innate immunity effector cells with well-established microbe-killing activities that are rapidly mobilized upon infection. They are also emerging as orchestrators of innate and adaptive immunities. However, their immunomodulatory activity during antiviral mAb immunotherapies has never been studied. Our data reveal that neutrophils have an essential role in immunotherapy-induced immune protection of infected mice. Unexpectedly, neutrophils have a limited effect in controlling viral propagation upon passive immunotherapy administration, which is mostly mediated by NK cells. Instead, neutrophils operate as essential inducers of a potent host humoral antiviral response. Thus, neutrophils play an unexpected key role in protective immunity induction by antiviral mAbs. Our work opens approaches to improve antiviral immunotherapies, as it suggests that preserving neutrophil functions and counts might be required for achieving mAb-induced protective immunity. 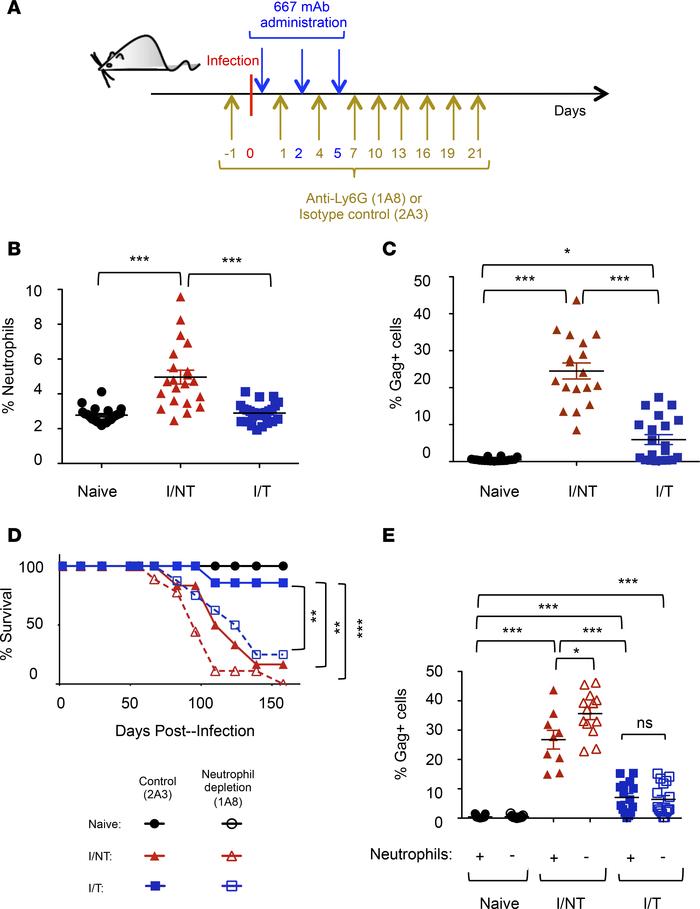 () Experimental scheme. Eight-day-old pups were infected and treated with the 667 mAb as indicated. Mice were treated as indicated with the anti-Ly6G 1A8 mAb or the isotype control 2A3 mAb in neutrophil depletion experiments. ( and ) Neutrophil recruitment and infected cell rate in spleen. Splenocytes from naive, infected/nontreated (I/NT), and infected/treated (I/T) mice were analyzed by flow cytometry on day 8 p.i. for (a) neutrophil recruitment (percentage of Ly6G+ cells) and (b) retroviral positivity of splenocytes (percentage of Gag+ cells) gated in the CD45.2+ population. The data presented correspond to 5 independent experiments, with at least 15 mice per group. () Mouse survival. Naive, I/NT, and I/T mice were treated with either the antineutrophil (1A8) or the control (2A3) mAb as indicated in and followed up for leukemic death. The data represent 2 independent experiments, with 6–9 mice per group. () Infected cells rate upon neutrophil depletion. Neutrophils of naive, I/NT, and I/T mice were depleted, or not, as indicated in and infected splenocytes were assayed as in on day 8 p.i. The data represent 4 independent experiments, with 9–15 mice per group. Data are expressed as mean ± SEM. Statistical significance was established using a parametric 1-way ANOVA test with a Bonferroni correction (* < 0.05; ** < 0.01; *** < 0.001).