Targeting the gut microbiome to treat the osteoarthritis of obesity

Targeting the gut microbiome to treat the osteoarthritis of obesity

Obesity is a risk factor for osteoarthritis (OA), the greatest cause of disability in the US. The impact of obesity on OA is driven by systemic inflammation, and increased systemic inflammation is now understood to be caused by gut microbiome dysbiosis. Oligofructose, a nondigestible prebiotic fiber, can restore a lean gut microbial community profile in the context of obesity, suggesting a potentially novel approach to treat the OA of obesity. Here, we report that — compared with the lean murine gut — obesity is associated with loss of beneficial Bifidobacteria, while key proinflammatory species gain in abundance. A downstream systemic inflammatory signature culminates with macrophage migration to the synovium and accelerated knee OA. Oligofructose supplementation restores the lean gut microbiome in obese mice, in part, by supporting key commensal microflora, particularly Bifidobacterium pseudolongum. This is associated with reduced inflammation in the colon, circulation, and knee and protection from OA. This observation of a gut microbiome–OA connection sets the stage for discovery of potentially new OA therapeutics involving strategic manipulation of specific microbial species inhabiting the intestinal space. 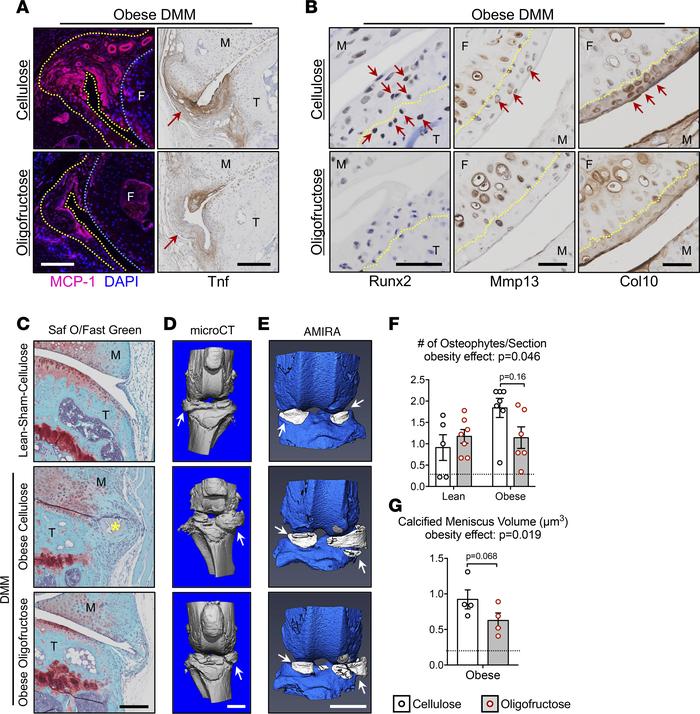