Compared with persons of European descent (ED), persons of African descent (AD) have lower aldosterone (ALDO) levels, with the assumption being that the increased cardiovascular disease (CVD) risk associated with AD is not related to ALDO. However, the appropriateness of the ALDO levels for the volume status in AD is unclear. We hypothesized that, even though ALDO levels are lower in AD, they are inappropriately increased, and therefore, ALDO could mediate the increased CVD in AD. To test this hypothesis, we analyzed data from HyperPATH — 1,788 individuals from the total cohort and 765 restricted to ED-to-AD in a 2:1 match and genotyped for the endothelin-1 gene (EDN1). Linear regression analyses with adjustments were performed. In the total and restricted cohorts, PRA, ALDO, and urinary potassium levels were significantly lower in AD. However, in the AD group, greater ALDO dysregulation was present as evidenced by higher ALDO/plasma renin activity (PRA) ratios (ARR) and sodium-modulated ALDO suppression-to-stimulation indices. Furthermore, EDN1 minor allele carriers had significantly greater ARRs than noncarriers but only in the AD group. ARR levels were modulated by a significant interaction between EDN1 and AD. Thus, EDN1 variants may identify particularly susceptible ADs who will be responsive to treatment targeting ALDO-dependent pathways (e.g., mineralocorticoid-receptor antagonists). 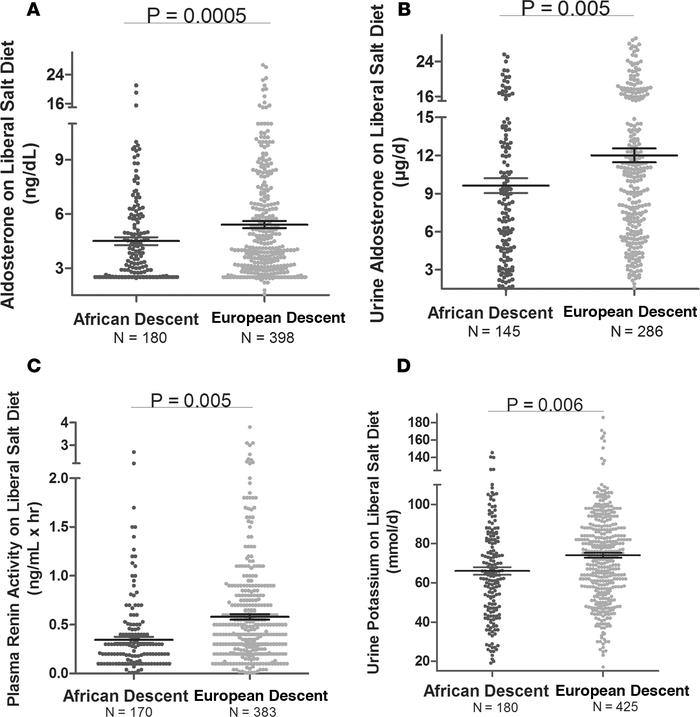