Pridopidine is currently under clinical development for Huntington disease (HD), with on-going studies to better characterize its therapeutic benefit and mode of action. Pridopidine was administered either prior to the appearance of disease phenotypes or in advanced stages of disease in the YAC128 mouse model of HD. In the early treatment cohort, animals received 0, 10, or 30 mg/kg pridopidine for a period of 10.5 months. In the late treatment cohort, animals were treated for 8 weeks with 0 mg/kg or an escalating dose of pridopidine (10 to 30 mg/kg over 3 weeks). Early treatment improved motor coordination and reduced anxiety- and depressive-like phenotypes in YAC128 mice, but it did not rescue striatal and corpus callosum atrophy. Late treatment, conversely, only improved depressive-like symptoms. RNA-seq analysis revealed that early pridopidine treatment reversed striatal transcriptional deficits, upregulating disease-specific genes that are known to be downregulated during HD, a finding that is experimentally confirmed herein. This suggests that pridopidine exerts beneficial effects at the transcriptional level. Taken together, our findings support continued clinical development of pridopidine for HD, particularly in the early stages of disease, and provide valuable insight into the potential therapeutic mode of action of pridopidine.

Schematic representation of the experimental design for the early and late pridopidine study in YAC128 HD mice. 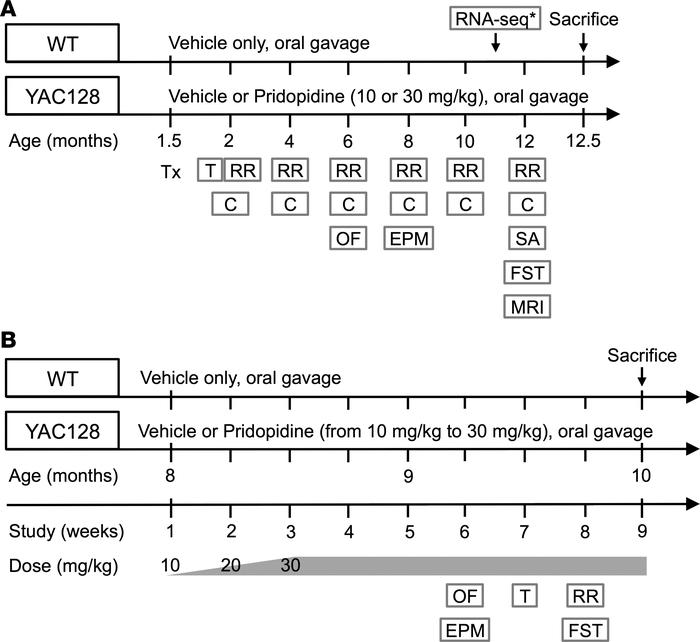