Birth defects are the leading cause of infant mortality, and they are caused by a combination of genetic and environmental factors. Environmental risk factors may contribute to birth defects in genetically susceptible infants by altering critical molecular pathways during embryogenesis, but experimental evidence for gene-environment interactions is limited. Fetal hyperglycemia associated with maternal diabetes results in a 5-fold increased risk of congenital heart disease (CHD), but the molecular basis for this correlation is unknown. Here, we show that the effects of maternal hyperglycemia on cardiac development are sensitized by haploinsufficiency of Notch1, a key transcriptional regulator known to cause CHD. Using ATAC-seq, we found that hyperglycemia decreased chromatin accessibility at the endothelial NO synthase (Nos3) locus, resulting in reduced NO synthesis. Transcription of Jarid2, a regulator of histone methyltransferase complexes, was increased in response to reduced NO, and this upregulation directly resulted in inhibition of Notch1 expression to levels below a threshold necessary for normal heart development. We extended these findings using a Drosophila maternal diabetic model that revealed the evolutionary conservation of this interaction and the Jarid2-mediated mechanism. These findings identify a gene-environment interaction between maternal hyperglycemia and Notch signaling and support a model in which environmental factors cause birth defects in genetically susceptible infants. 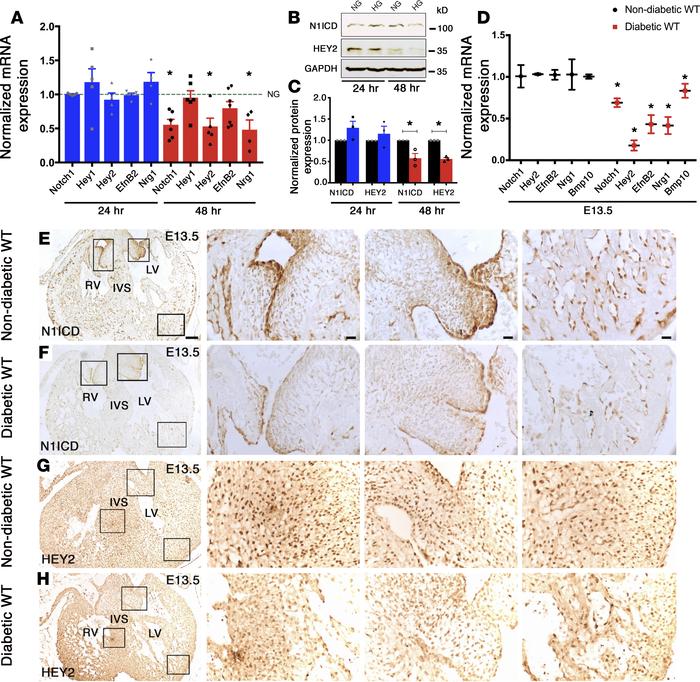