Premature infants are at high risk for developing bronchopulmonary dysplasia (BPD), characterized by chronic inflammation and inhibition of lung development, which we have recently identified as being modulated by microRNAs (miRNAs) and alterations in the airway microbiome. Exosomes and exosomal miRNAs may regulate cell differentiation and tissue and organ development. We discovered that tracheal aspirates from infants with severe BPD had increased numbers of, but smaller, exosomes compared with term controls. Similarly, bronchoalveolar lavage fluid from hyperoxia-exposed mice (an animal model of BPD) and supernatants from hyperoxia-exposed human bronchial epithelial cells (in vitro model of BPD) had increased exosomes compared with air controls. Next, in a prospective cohort study of tracheal aspirates obtained at birth from extremely preterm infants, utilizing independent discovery and validation cohorts, we identified unbiased exosomal miRNA signatures predictive of severe BPD. The strongest signal of reduced miR-876-3p in BPD-susceptible compared with BPD-resistant infants was confirmed in the animal model and in vitro models of BPD. In addition, based on our recent discovery of increased Proteobacteria in the airway microbiome being associated with BPD, we developed potentially novel in vivo and in vitro models for BPD combining Proteobacterial LPS and hyperoxia exposure. Addition of LPS led to a larger reduction in exosomal miR 876-3p in both hyperoxia and normoxia compared with hyperoxia alone, thus indicating a potential mechanism by which alterations in microbiota can suppress miR 876-3p. Gain of function of miR 876-3p improved the alveolar architecture in the in vivo BPD model, demonstrating a causal link between miR 876-3p and BPD. In summary, we provide evidence for the strong predictive biomarker potential of miR 876-3p in severe BPD. We also provide insights on the pathogenesis of neonatal lung disease, as modulated by hyperoxia and microbial product–induced changes in exosomal miRNA 876-3p, which could be targeted for future therapeutic development.

Airway exosome characteristics in BPD: human, in vivo and in vitro. 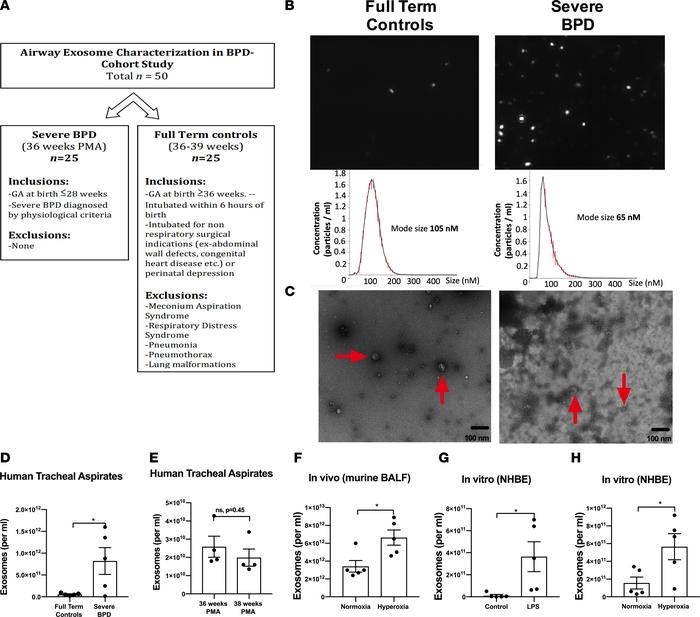 () Study design of the prospective cohort study to identify airway exosomal characteristics in severe human BPD. ( and ) The TA exosomes from infants with severe BPD ( = 25) were smaller in size ( and ) but larger in number (; = 0.03, test), compared with controls ( = 25). Size demonstrated by nanosight () and by electron microscopy (). Arrows indicate exosomes. () No difference was seen between number of exosomes in TA of control infants at 36 versus 38 weeks postmenstrual age. () Exosomes in BALF of hyperoxia-exposed mice are increased in number compared with normoxic controls ( = 0.02, test). () LPS exposure for 12 hours increases the number in exosomes in NHBE cell supernatants, compared with controls ( = 0.03, test). () Hyperoxia-exposed NHBE cells release increased numbers of exosomes into supernatants compared with normoxic cells ( = 0.03, test). * < 0.05.