The secretion of insulin and glucagon from the pancreas and the incretin hormones glucagon-like peptide-1 (GLP-1) and glucose-dependent insulinotropic peptide (GIP) from the gastrointestinal tract is essential for glucose homeostasis. Several novel treatment strategies for type 2 diabetes (T2D) mimic GLP-1 actions or inhibit incretin degradation (DPP4 inhibitors), but none is thus far aimed at increasing the secretion of endogenous incretins. In order to identify new potential therapeutic targets for treatment of T2D, we performed a meta-analysis of a GWAS and an exome-wide association study of circulating insulin, glucagon, GIP, and GLP-1 concentrations measured during an oral glucose tolerance test in up to 7,828 individuals. We identified 6 genome-wide significant functional loci associated with plasma incretin concentrations in or near the SLC5A1 (encoding SGLT1), GIPR, ABO, GLP2R, F13A1, and HOXD1 genes and studied the effect of these variants on mRNA expression in pancreatic islet and on metabolic phenotypes. Immunohistochemistry showed expression of GIPR, ABO, and HOXD1 in human enteroendocrine cells and expression of ABO in pancreatic islets, supporting a role in hormone secretion. This study thus provides candidate genes and insight into mechanisms by which secretion and breakdown of GIP and GLP-1 are regulated. 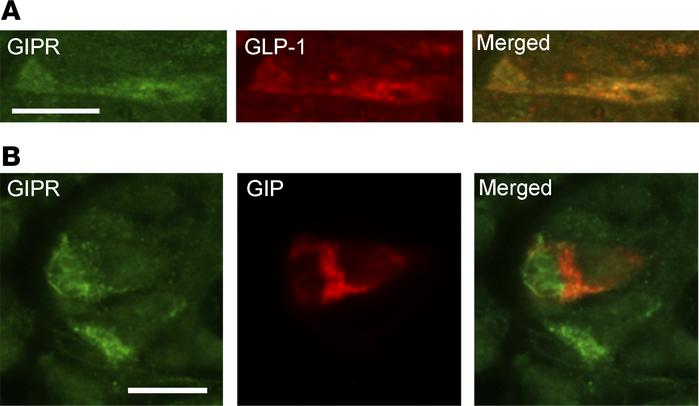