Long-term memory depends on the control of activity-dependent neuronal gene expression, which is regulated by epigenetic modifications. The epigenetic modification of histones is orchestrated by the opposing activities of 2 classes of regulatory complexes: permissive coactivators and silencing corepressors. Much work has focused on coactivator complexes, but little is known about the corepressor complexes that suppress the expression of plasticity-related genes. Here, we define a critical role for the corepressor SIN3A in memory and synaptic plasticity, showing that postnatal neuronal deletion of Sin3a enhances hippocampal long-term potentiation and long-term contextual fear memory. SIN3A regulates the expression of genes encoding proteins in the postsynaptic density. Loss of SIN3A increases expression of the synaptic scaffold Homer1, alters the metabotropic glutamate receptor 1α (mGluR1α) and mGluR5 dependence of long-term potentiation, and increases activation of ERK in the hippocampus after learning. Our studies define a critical role for corepressors in modulating neural plasticity and memory consolidation and reveal that Homer1/mGluR signaling pathways may be central molecular mechanisms for memory enhancement.

Neuronal deletion of SIN3A enhances hippocampal LTP but does not change basal synaptic properties at the Schaffer collateral synapses. 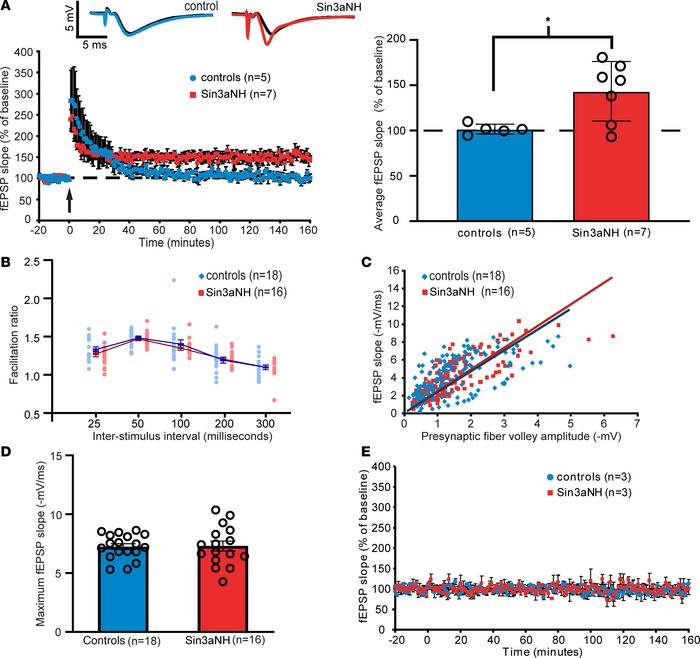