Occurrence of transient ischemic attacks (TIA) and cerebral strokes is a recognized risk associated with cocaine abuse. Here, we use a rodent model along with optical imaging to study cocaine-induced TIA and the associated dynamic changes in cerebral blood flow velocity (CBFv) and cerebrovasculature. We show that chronic cocaine exposure in mice resulted in marked cortical hypoperfusion, in significant arterial and venous vasoconstriction, and in a sensitized vascular response to an acute cocaine injection. Starting after 10 days of exposure, an acute cocaine challenge to these mice resulted in a TIA, which presented as hemiparalysis and was associated with an abrupt exacerbation of CBFv. The severity of the TIA correlated with the decreases in cortical CBFv such that the greater the decreases in flow, the longer the TIA duration. The severity of TIA peaked around 17–22 days of cocaine exposure and decreased thereafter in parallel to a reorganization of CBFv from superficial to deep cortical layers, along with an increase in vessel density into these layers. Here, we document for the first time to our knowledge evidence of a TIA in an animal model of chronic cocaine exposure that was associated with profound decreases in CBFv, and we revealed that while the severity of the TIA initially increased with repeated exposures, it subsequently improved in parallel to an increase in the vessel density. This suggests that strategies to accelerate cerebrovascular recovery might be therapeutically beneficial in cocaine abusers.

Behavior recording of difference TIA phases and its histogram distribution as a function of time. 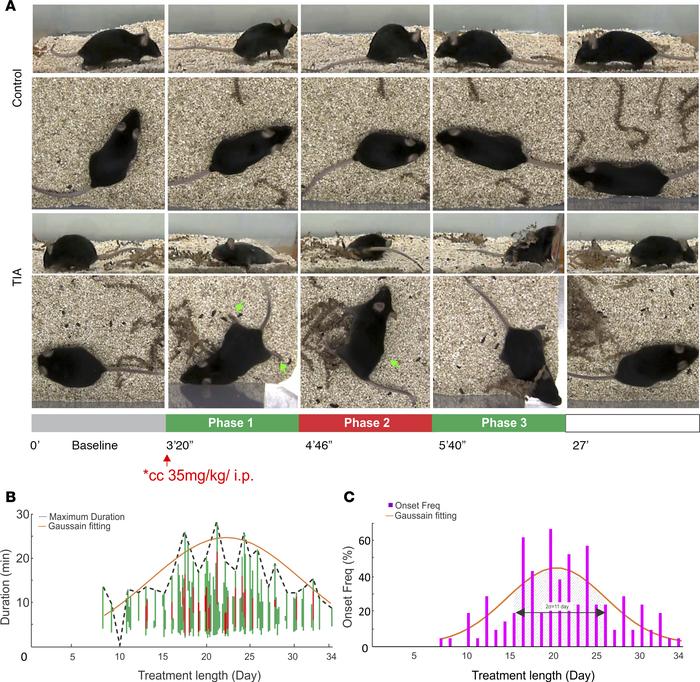