Life-sustaining responses to low oxygen, or hypoxia, depend on signal transduction by HIFs, but the underlying mechanisms by which cells sense hypoxia are not completely understood. Based on prior studies suggesting a link between the β-adrenergic receptor (β-AR) and hypoxia responses, we hypothesized that the β-AR mediates hypoxia sensing and is necessary for HIF-1α accumulation. Beta blocker treatment of mice suppressed hypoxia induction of renal HIF-1α accumulation, erythropoietin production, and erythropoiesis in vivo. Likewise, beta blocker treatment of primary human endothelial cells in vitro decreased hypoxia-mediated HIF-1α accumulation and binding to target genes and the downstream hypoxia-inducible gene expression. In mechanistic studies, cAMP-activated PKA and/or GPCR kinases (GRK), which both participate in β-AR signal transduction, were investigated. Direct activation of cAMP/PKA pathways did not induce HIF-1α accumulation, and inhibition of PKA did not blunt HIF-1α induction by hypoxia. In contrast, pharmacological inhibition of GRK, or expression of a GRK phosphorylation–deficient β-AR mutant in cells, blocked hypoxia-mediated HIF-1α accumulation. Mass spectrometry–based quantitative analyses revealed a hypoxia-mediated β-AR phosphorylation barcode that was different from the classical agonist phosphorylation barcode. These findings indicate that the β-AR is fundamental to the molecular and physiological responses to hypoxia. 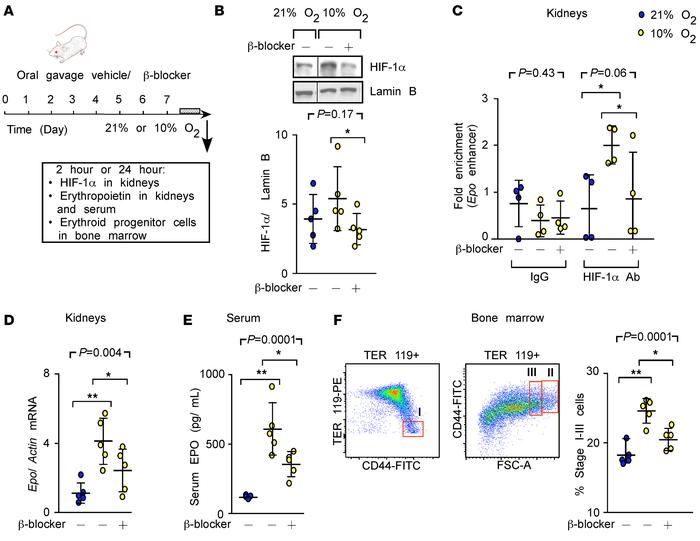 () Mice were orally administered vehicle or carvedilol (beta blocker), followed by exposure to 21% or 10% oxygen. Kidneys and serum were harvested after 2 hours, and bone marrow was collected at 24 hours ( = 5/group). () Expression of HIF-1α and Lamin B in nuclear extracts of kidneys, as detected by Western blot. Samples were run on the same gel but were noncontiguous. () HIF-1α occupancy at the erythropoietin gene , detected by ChIP with control IgG or HIF-1α antibody and quantitative PCR. Fold enrichment was percentage of input (treatment) divided by average percentage of input (normoxia). () Expression of and mRNA in kidneys, as detected by reverse-transcription quantitative PCR. () Serum erythropoietin by ELISA. () Flow cytometry for erythroid progenitor populations. Proerythroblasts (I) were defined by CD44hiTER119lo and basophilic (II) and polychromatic erythroblasts (III) were defined by TER119hi as well as size and CD44 expression. Data are mean ± SD. * < 0.05; ** < 0.005, ANOVA.