Adiponectin is a pleiotropic cytokine with diverse immunomodulatory effects on macrophages and lymphocytes. In the current paradigm, lymphocytes and macrophages respond to adiponectin that is produced by adipocytes and other parenchymal cells. Using a model of chronic arterial inflammation in cardiac transplants, we found that T cells derived from the recipient migrate to the heart and produce adiponectin locally. The evidence that T cells produce significant amounts of adiponectin is based on 3 experimental approaches. First, CD4+ T cells isolated from the blood and spleen after cardiac transplantation express mRNA for adiponectin. Second, reconstitution of T cell–deficient recipients with transgenic CD4+ T cells that express receptors for donor antigens results in arterial infiltrates containing T cells and increased mRNA expression for adiponectin in cardiac transplants. Third, CD4+ T cells isolated from the allograft secrete adiponectin in vitro. Taken together, these data indicate that adiponectin-competent cells originating in the recipient migrate into the transplant. Establishing T cells as a source of adiponectin provides a new dimension, to our knowledge, to the modulatory effects of adiponectin on immune responses.

Adiponectin and macrophage infiltrates are increased in cardiac allografts 4 weeks after transplantation. 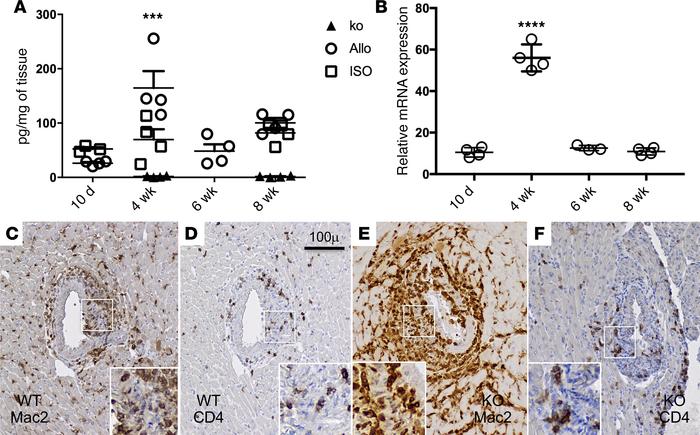 () Adiponectin protein was measured by ELISA in tissue homogenates from cardiac isografts (open squares) and allografts (open circles) in WT mice, as well as allografts in adiponectin-KO mice (closed triangles) at 10 days to 8 weeks ( = 4 per group). () Message for adiponectin in the allografts of WT mice was calculated as fold change compared with isografts ( = 4 per group). The ± SEM is represented in each group. Significant differences are indicated as **** < 0.00001 and *** < 0.0001 by 1-way ANOVA. ( and ) IHC for Mac2+ macrophage and CD4+ T cell infiltrates in WT cardiac allografts in WT recipients. ( and ) Mac2+ macrophage infiltrates and CD4+ T cell infiltrates in adiponectin-KO allografts to knock out recipients. Original magnification of – is 100×; scale bar: 100μ (inserts are enlargements of the boxed areas encompassing the arterial wall). Positive cells are identified by brown precipitate.