Processing by the proprotein convertase furin is believed to be critical for the biological activity of multiple proteins involved in hemostasis, including coagulation factor VIII (FVIII). This belief prompted the retention of the furin recognition motif (amino acids 1645–1648) in the design of B-domain–deleted FVIII (FVIII-BDD) products in current clinical use and in the drug development pipeline, as well as in experimental FVIII gene therapy strategies. Here, we report that processing by furin is in fact deleterious to FVIII-BDD secretion and procoagulant activity. Inhibition of furin increases the secretion and decreases the intracellular retention of FVIII-BDD protein in mammalian cells. Our new variant (FVIII-ΔF), in which this recognition motif is removed, efficiently circumvents furin. FVIII-ΔF demonstrates increased recombinant protein yields, enhanced clotting activity, and higher circulating FVIII levels after adeno-associated viral vector–based liver gene therapy in a murine model of severe hemophilia A (HA) compared with FVIII-BDD. Moreover, we observed an amelioration of the bleeding phenotype in severe HA dogs with sustained therapeutic FVIII levels after FVIII-ΔF gene therapy at a lower vector dose than previously employed in this model. The immunogenicity of FVIII-ΔF did not differ from that of FVIII-BDD as a protein or a gene therapeutic. Thus, contrary to previous suppositions, FVIII variants that can avoid furin processing are likely to have enhanced translational potential for HA therapy.

Effect of furin inhibition on the secretion and intracellular retention of human factor VIII (hFVIII) variants. 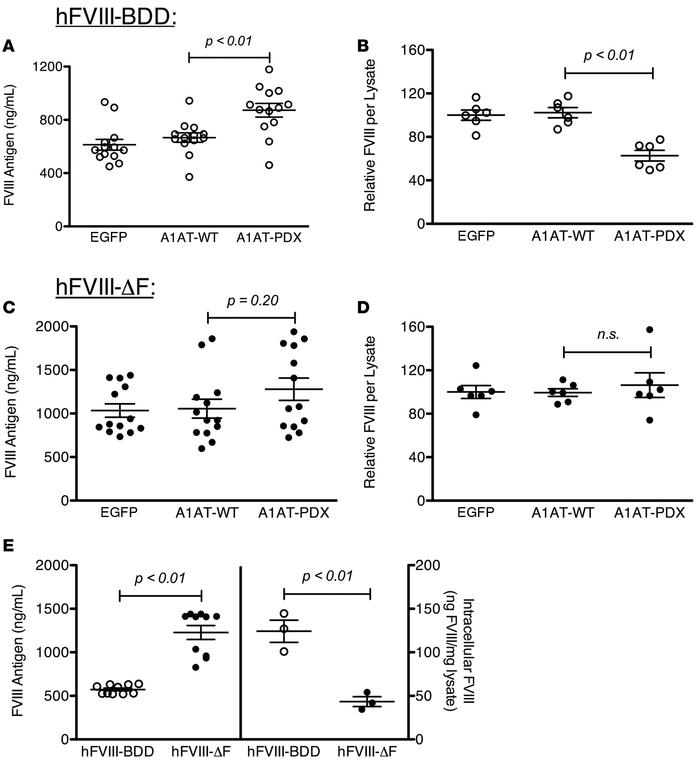 The amount of hFVIII secreted ( and ) or intracellularly retained ( and ) from baby hamster kidney (BHK) cells stably expressing either hFVIII-BDD ( and ) or hFVIII-ΔF ( and ) after transduction with vectors containing either the furin-inhibiting α1-antitrypsin Portland (A1AT-PDX) or a negative control (A1AT-wild type [A1AT-WT] or EGFP). Intracellular FVIII is reported as the relative amount of FVIII after transduction compared with the mean of the EGFP-transduced group. () Direct comparison of the amount of secreted (left) and intracellularly retained (right) hFVIII in BHK cells expressing either hFVIII-BDD or hFVIII-ΔF. All FVIII levels were determined by ELISA in duplicate. Each data point represents a distinct transduction and results are aggregates of 2–4 distinct experiments. Means were compared by 2-tailed Student’s test. values greater than 0.05 were considered not significant (n.s.). Horizontal markers in whisker plots represent the mean and 1 SEM.