The challenge of translating findings from animal models to the clinic is well known. An example of this challenge is the striking effectiveness of neurokinin-1 receptor (NK-1R) antagonists in mouse models of inflammation coupled with their equally striking failure in clinical investigations in humans. Here, we provide an explanation for this dichotomy: Mas-related GPCRs (Mrgprs) mediate some aspects of inflammation that had been considered mediated by NK-1R. In support of this explanation, we show that conventional NK-1R antagonists have off-target activity on the mouse receptor MrgprB2 but not on the homologous human receptor MRGPRX2. An unrelated tripeptide NK-1R antagonist has dual activity on MRGPRX2. This tripeptide both suppresses itch in mice and inhibits degranulation from the LAD-2 human mast cell line elicited by basic secretagogue activation of MRGPRX2. Antagonists of Mrgprs may fill the void left by the failure of NK-1R antagonists. 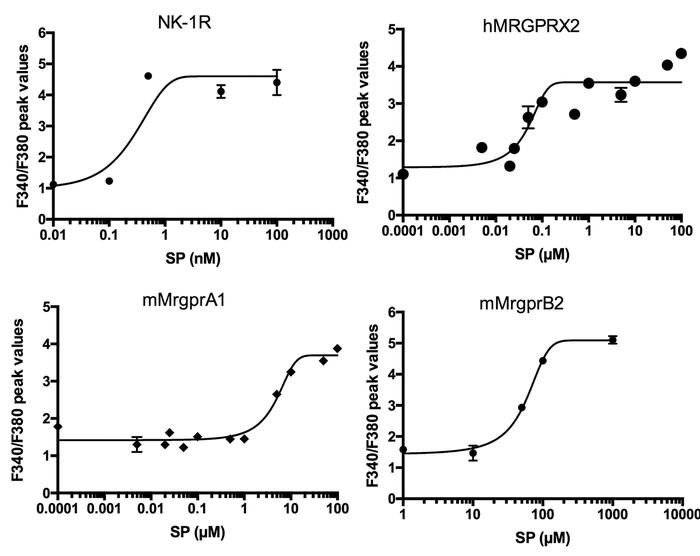 HeLa cells were transfected with cDNAs encoding NK-1R, mouse MrgprB2, and mouse MrgprA1. A stably transfected HEK293 cell line was used for human MRGPRX2. Intracellular calcium ([Ca2+]i) was determined by ratiometric Fura-2 imaging after addition of substance P (SP). SP is known to activate NK-1R, human MRGPRX2, and mouse MrgprB2, as confirmed here. SP also activates mouse MrgprA1 but not several other mouse Mrgprs or human MRGPRX1, X3, and X4 (). The EC50s of SP for NK1-R, MRGPRX2, MrgprA1, and MrgprB2 are 0.5 nm, 100 nM, 5 μM, and 50 μM, respectively. These differential responses served to guide the concentrations of SP and antagonists used in the remainder of the studies. All data points are triplicates, and studies were performed at least twice.