Systemic sclerosis (SSc) is a rare autoimmune disease with the highest case-fatality rate of all connective tissue diseases. Current efforts to determine patient response to a given treatment using the modified Rodnan skin score (mRSS) are complicated by interclinician variability, confounding, and the time required between sequential mRSS measurements to observe meaningful change. There is an unmet critical need for an objective metric of SSc disease severity. Here, we performed an integrated, multicohort analysis of SSc transcriptome data across 7 datasets from 6 centers composed of 515 samples. Using 158 skin samples from SSc patients and healthy controls recruited at 2 centers as a discovery cohort, we identified a 415-gene expression signature specific for SSc, and validated its ability to distinguish SSc patients from healthy controls in an additional 357 skin samples from 5 independent cohorts. Next, we defined the SSc skin severity score (4S). In every SSc cohort of skin biopsy samples analyzed in our study, 4S correlated significantly with mRSS, allowing objective quantification of SSc disease severity. Using transcriptome data from the largest longitudinal trial of SSc patients to date, we showed that 4S allowed us to objectively monitor individual SSc patients over time, as (a) the change in 4S of a patient is significantly correlated with change in the mRSS, and (b) the change in 4S at 12 months of treatment could predict the change in mRSS at 24 months. Our results suggest that 4S could be used to distinguish treatment responders from nonresponders prior to mRSS change. Our results demonstrate the potential clinical utility of a novel robust molecular signature and a computational approach to SSc disease severity quantification.

4S is highly correlated with modified Rodnan skin score (mRSS) across all datasets. 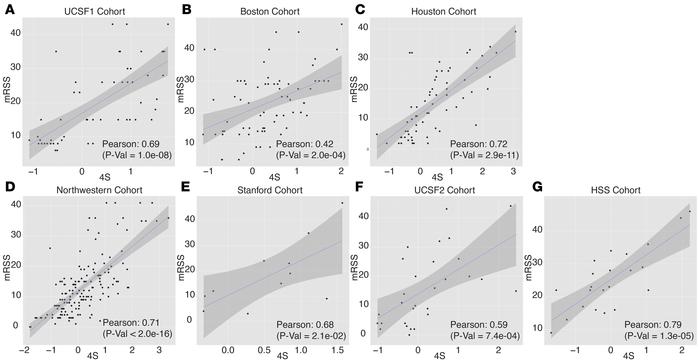 Correlation plots comparing mRSS with the systemic sclerosis skin severity score (4S) for all of the datasets. Panels and ( = 54 and 72, respectively) are discovery cohorts and panels – ( = 66, 161, 13, 29, and 22, respectively) are validation cohorts. Each data point represents a patient skin biopsy. The blue line is the line of best fit and the gray region represents its 95% CI. HSS, Hospital for Special Surgery.