Esophageal squamous cell carcinoma (ESCC) is endemic in regions of sub-Saharan Africa (SSA), where it is the third most common cancer. Here, we describe whole-exome tumor/normal sequencing and RNA transcriptomic analysis of 59 patients with ESCC in Malawi. We observed similar genetic aberrations as reported in Asian and North American cohorts, including mutations of , , , , , , and . Analyses for nonhuman sequences did not reveal evidence for infection with HPV or other occult pathogens. Mutational signature analysis revealed common signatures associated with aging, cytidine deaminase activity (APOBEC), and a third signature of unknown origin, but signatures of inhaled tobacco use, aflatoxin and mismatch repair were notably absent. Based on RNA expression analysis, ESCC could be divided into 3 distinct subtypes, which were distinguished by their expression of cell cycle and neural transcripts. This study demonstrates discrete subtypes of ESCC in SSA, and suggests that the endemic nature of this disease reflects exposure to a carcinogen other than tobacco and oncogenic viruses. 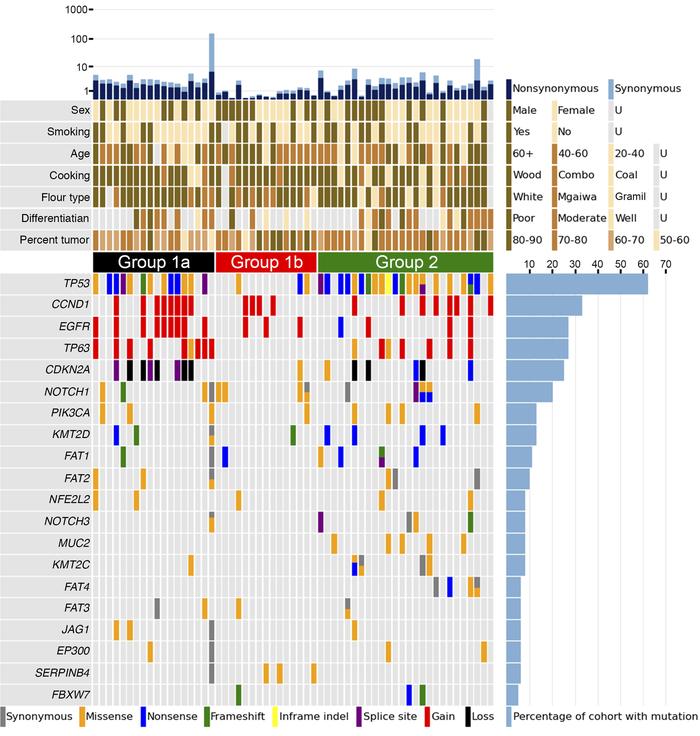