Necrotizing fasciitis caused by group A streptococcus (GAS) is a life-threatening, rapidly progressing infection. At present, biofilm is not recognized as a potential problem in GAS necrotizing soft tissue infections (NSTI), as it is typically linked to chronic infections or associated with foreign devices. Here, we present a case of a previously healthy male presenting with NSTI caused by GAS. The infection persisted over 24 days, and the surgeon documented the presence of a “thick layer biofilm” in the fascia. Subsequent analysis of NSTI patient tissue biopsies prospectively included in a multicenter study revealed multiple areas of biofilm in 32% of the patients studied. Biopsies associated with biofilm formation were characterized by massive bacterial load, a pronounced inflammatory response, and clinical signs of more severe tissue involvement. In vitro infections of a human skin tissue model with GAS NSTI isolates also revealed multilayered fibrous biofilm structures, which were found to be under the control of the global Nra gene regulator. The finding of GAS biofilm formation in NSTIs emphasizes the urgent need for biofilm to be considered as a potential complicating microbiological feature of GAS NSTI and, consequently, emphasizes reconsideration of antibiotic treatment protocols. 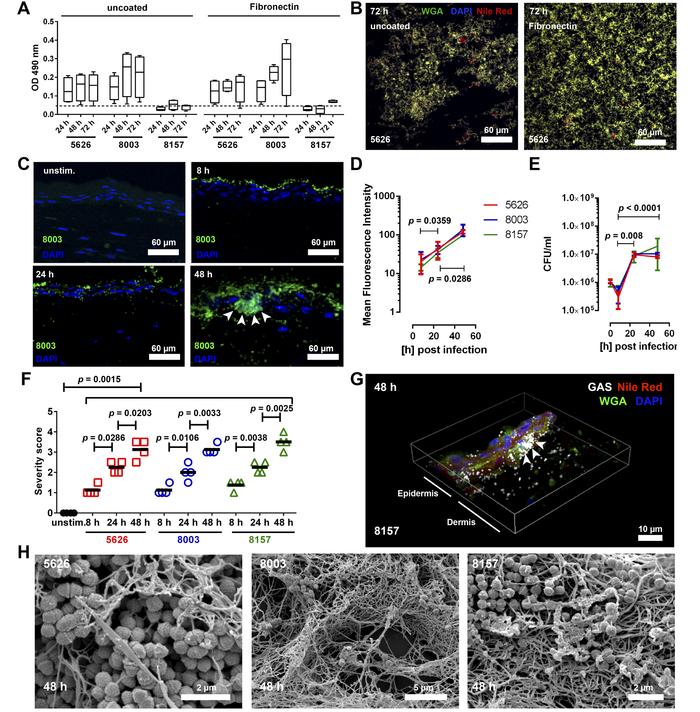