The capacity of pancreatic β cells to maintain glucose homeostasis during chronic physiologic and immunologic stress is important for cellular and metabolic homeostasis. Insulin receptor substrate 2 (IRS2) is a regulated adapter protein that links the insulin and IGF1 receptors to downstream signaling cascades. Since strategies to maintain or increase IRS2 expression can promote β cell growth, function, and survival, we conducted a screen to find small molecules that can increase IRS2 mRNA in isolated human pancreatic islets. We identified 77 compounds, including 15 that contained a tricyclic core. To establish the efficacy of our approach, one of the tricyclic compounds, trimeprazine tartrate, was investigated in isolated human islets and in mouse models. Trimeprazine is a first-generation antihistamine that acts as a partial agonist against the histamine H1 receptor (H1R) and other GPCRs, some of which are expressed on human islets. Trimeprazine promoted CREB phosphorylation and increased the concentration of IRS2 in islets. IRS2 was required for trimeprazine to increase nuclear Pdx1, islet mass, β cell replication and function, and glucose tolerance in mice. Moreover, trimeprazine synergized with anti-CD3 Abs to reduce the progression of diabetes in NOD mice. Finally, it increased the function of human islet transplants in streptozotocin-induced (STZ-induced) diabetic mice. Thus, trimeprazine, its analogs, or possibly other compounds that increase IRS2 in islets and β cells without adverse systemic effects might provide mechanism-based strategies to prevent the progression of diabetes. 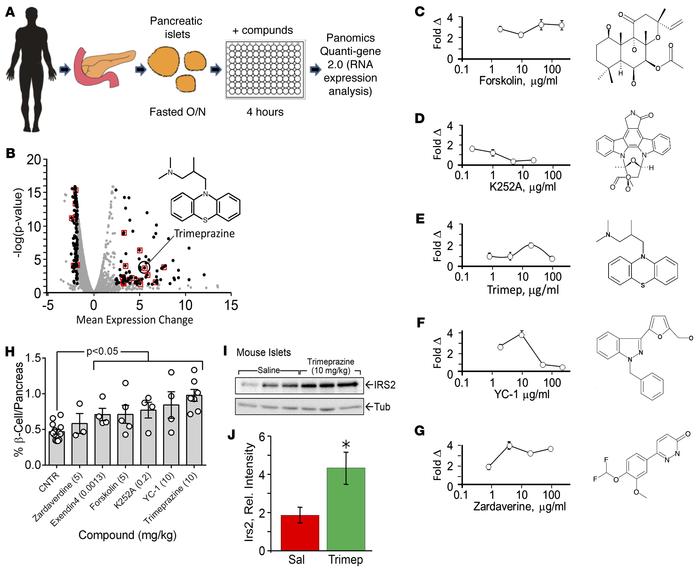 () The screening strategy. () Volcano plot of mRNA IRS2 expression in islets treated for 4 hours with each compound. The –log ( value) and mean expression change were calculated by generalized linear regression for 2 independent single measurements for each test compound against DMSO control expression. A mean expression change of more than the 95th percentile or less than the 5th percentile ( < 0.05) are indicated with black circles. Tricyclic compounds are highlighted by a red box, and trimeprazine is highlighted. (–) Effect of forskolin, trimeprazine, zardanerine, K252A, and YC-1 on IRS2 mRNA expression in human islets from 3 different donors compared with the DMSO control analyzed at 4 different concentrations ( = 12; fold Δ ± 95% CI). () C57BL/6J male mice were treated with saline or the indicated compound by i.p. injection once a day for 3 weeks starting at 6 weeks of age. Exendin-4 was used as a positive control. Insulin-positive areas and total pancreas section areas were assessed by Spot Advanced Software (). Graph shows the daily dose of compound that caused the greatest increase in β cell area. Two whole pancreas sections were analyzed for each mouse, and each bar represents the average β cell area for at least 4 mice. A GLM was used to determine the mean ± SEM and to obtain the Bonferroni-corrected value, with treatment as the factor. ( and ) C57BL/6J male mice were injected i.p. with trimeprazine tartrate once a day for 7 days starting at 6 weeks of age. The islets were isolated and analyzed by immunoblotting. Irs2 intensity was normalized against tubulin intensity, and the average normalized Irs2 ± 95% CI was determined. * = 0.27, by GLM and Bonferroni correction, with treatment as the factor. Cntr, control; GLM, generalized linear model; IRS2, insulin receptor substrate 2; O/N, overnight; Rel., relative; Sal, saline; Tub, tubulin; Trimep, trimeprazine.