SMA with respiratory distress type 1 (SMARD1) and Charcot-Marie-Tooth type 2S (CMT2S) are results of mutations in immunoglobulin mu DNA binding protein 2 (IGHMBP2). IGHMBP2 is a UPF1-like helicase with proposed roles in several cellular processes, including translation. This study examines activator of basal transcription 1 (ABT1), a modifier of SMARD1-nmd disease pathology. Microscale thermophoresis and dynamic light scattering demonstrate that IGHMBP2 and ABT1 proteins directly interact with high affinity. The association of ABT1 with IGHMBP2 significantly increases the ATPase and helicase activity as well as the processivity of IGHMBP2. The IGHMBP2/ABT1 complex interacts with the 47S pre-rRNA 5′ external transcribed spacer and U3 small nucleolar RNA (snoRNA), suggesting that the IGHMBP2/ABT1 complex is important for pre-rRNA processing. Intracerebroventricular injection of scAAV9-Abt1 decreases FVB-Ighmbp2nmd/nmd disease pathology, significantly increases lifespan, and substantially decreases neuromuscular junction denervation. To our knowledge, ABT1 is the first disease-modifying gene identified for SMARD1. We provide a mechanism proposing that ABT1 decreases disease pathology in FVB-Ighmbp2nmd/nmd mutants by optimizing IGHMBP2 biochemical activity (ATPase and helicase activity). Our studies provide insight into SMARD1 pathogenesis, suggesting that ABT1 modifies IGHMBP2 activity as a means to regulate pre-rRNA processing.

The association of ABT1 with IGHMBP2 increases the ATPase and helicase activity as well as the processivity of IGHMBP2. 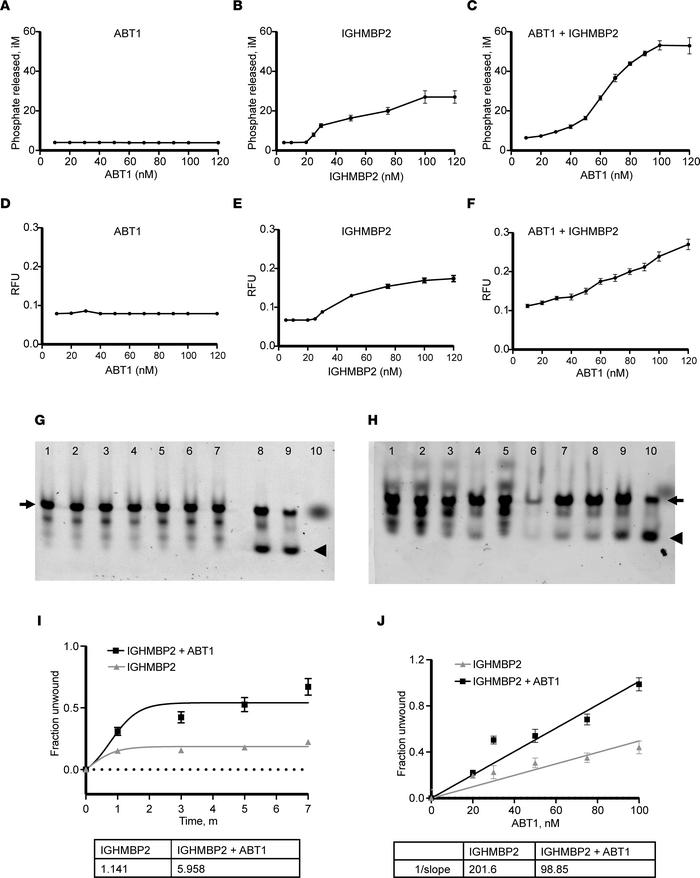