The expression of indoleamine 2,3-dioxygenase (IDO), a robust immunosuppressant, is significantly induced in macaque tuberculosis (TB) granulomas, where it is expressed on IFN-responsive macrophages and myeloid-derived suppressor cells. IDO expression is also highly induced in human TB granulomas, and products of its activity are detected in patients with TB. In vivo blockade of IDO activity resulted in the reorganization of the granuloma with substantially greater T cells being recruited to the core of the lesions. This correlated with better immune control of TB and reduced lung M. tuberculosis burdens. To study if the IDO blockade strategy can be translated to a bona fide host-directed therapy in the clinical setting of TB, we studied the effect of IDO inhibitor 1-methyl-d-tryptophan adjunctive to suboptimal anti-TB chemotherapy. While two-thirds of controls and one-third of chemotherapy-treated animals progressed to active TB, inhibition of IDO adjunctive to the same therapy protected macaques from TB, as measured by clinical, radiological, and microbiological attributes. Although chemotherapy improved proliferative T cell responses, adjunctive inhibition of IDO further enhanced the recruitment of effector T cells to the lung. These results strongly suggest the possibility that IDO inhibition can be attempted adjunctive to anti-TB chemotherapy in clinical trials.

Inclusion of D1MT adjunctive to ME results in the inhibition of IDO enzymatic activity. 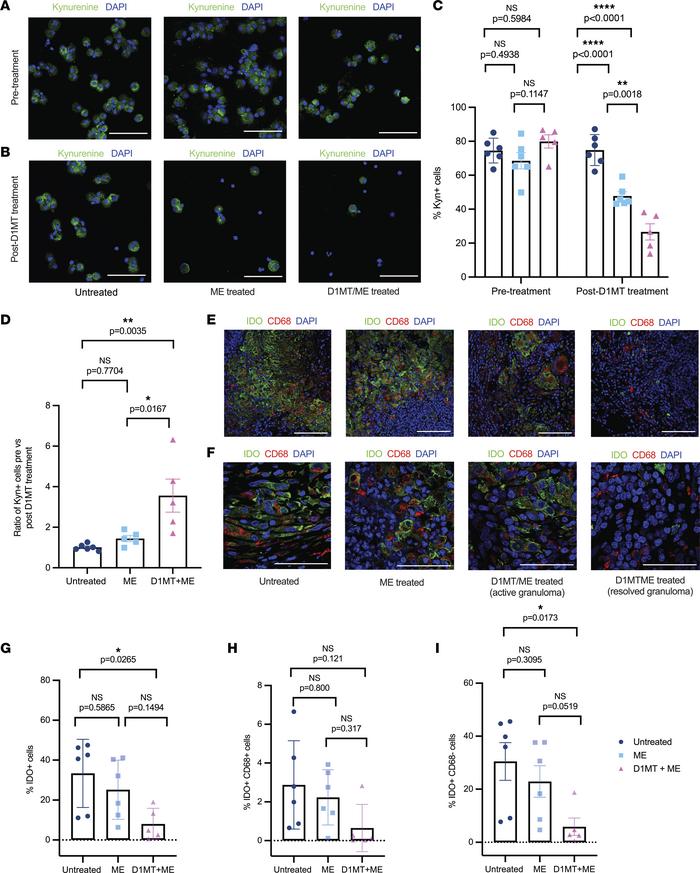 () Immunofluorescence was performed on BAL cells collected at week 7 postinfection (pre-treatment) and week 11 postinfection (post-D1MT treatment) for kynurenine (Kyn). Representative confocal images showing Kyn (green) and nucleus (blue) in BAL cells prior to the start of the treatment (week 7) () and at the end of D1MT treatment (week 11) (). Twelve random fields per animal in all 3 groups were captured using Zeiss LSM 800 confocal microscope and quantified using ImageJ (Fiji) software. () Graph showing the percentages of Kyn-positive cells present in BAL before and after D1MT treatment. () Graphical representation of the ratio of Kyn-positive cells before versus after D1MT treatment among the 3 groups. The ME/D1MT group depicted significantly higher ratios compared with the other 2 groups. () The lung sections obtained at necropsy were stained for pan-macrophage marker CD68, IDO, and DAPI (nucleus). The representative multilabel confocal images of the lung granulomas of the untreated, ME-treated, and ME/D1MT-treated macaques as well as resolved granuloma in ME/D1MT-treated macaques depicting CD68 (red), IDO (green), and nucleus (blue) captured at 20× () and 63× () original magnification. These images were captured using Zeiss LSM 800 confocal microscope. The whole tissue sections stained with CD68, IDO, and DAPI were then scanned using the slide scanner (Zeiss Axio Scan Z1) and were subsequently quantified using HALO analysis software for IDO expression by macrophages. () Graph showing the percentages of IDO-expressing cells or IDO+ cells, () IDO-expressing macrophages or IDO+CD68+ cells, and () IDO-expressing cells other than macrophages or IDO+CD68– in the 3 groups. Scale bars, 100 μm (original magnification, 20×; , , and ) and 50 μm (original magnification, 63×; ). values are indicated above the plots as obtained from 2-way ANOVA () and 1-way ANOVA (, , , and ) with Tukey’s multiple-comparison test. Data are represented as mean ± SEM.