Acute pancreatitis (AP) is a local and/or systemic inflammatory disease that starts with acinar cell injury and necrosis; it has no effective medical treatment and thus remains a life-threatening condition. Interleukin-37 (IL-37), a natural immunomodulator, has demonstrated an antiinflammatory effect; however, the role of IL-37 in AP remains unknown. The serum IL-37 levels of 39 healthy controls and 94 patients with AP were measured. Cholecystokinin was applied to induce pancreatic acinar cell injury in vitro. Classical experimental AP models, such as caerulein, l-arginine, and taurolithocholic acid 3-sulfate disodium salt, were included in the in vivo study. A transgenic mouse model with the IL-37 gene and administration of recombinant IL-37 were used to further investigate the function of IL-37 in AP. Pancreas-specific gasdermin D–knockout (GSDMD-knockout) mice were used to explore the protective mechanism of IL-37. Our results showed that serum IL-37 levels in humans were negatively correlated with the severity of AP. Furthermore, IL-37–transgenic mice and supplementation with recombinant IL-37 could both protect against AP. Mechanistically, IL-37 was able to suppress pyroptosis of injured acinar cells, and specific depletion of GSDMD in the pancreas counteracted the protective effect of IL-37. Our study demonstrates that IL-37 protects against acinar cell pyroptosis in AP. 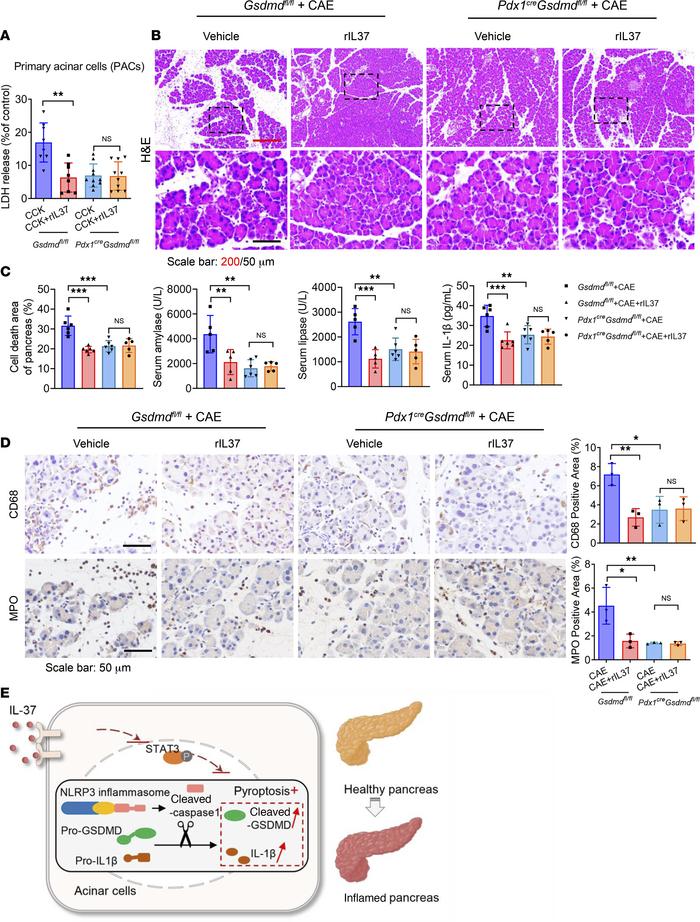 () Primary pancreatic acinar cells (PACs) were isolated from and (G) mice. PACs were treated with CCK with or without rIL37 (50 ng/mL). The LDH levels are shown. (–) AP was induced in and mice with CAE, and rIL37 (5 μg/kg) was administered 1 hour after AP induction. () H&E staining of pancreatic tissues. Scale bars: 200 or 50 μm. () Percentages of pancreatic cell death area, and serum amylase, lipase, and IL-1β levels at 12 hours ( = 5–6 per group). () Representative images and quantitative analysis for IHC staining of CD68 and MPO ( = 3 per group). Scale bars: 50 μm. () Schematic diagram showing that IL-37 protects against AP through suppression of the pyroptosis pathway. Statistical comparisons were made using 1-way ANOVA. Data are presented as mean ± SD, and statistical significance is denoted as * < 0.05, ** < 0.01, and *** < 0.001.