Maternal hyperthyroidism is associated with an increased incidence of congenital abnormalities at birth, but it is not clear which of these defects arise from a transient developmental excess of thyroid hormone and which depend on pregnancy stage, antithyroid drug choice, or unwanted subsequent fetal hypothyroidism. To address this issue, we studied a mouse model of comprehensive developmental thyrotoxicosis secondary to a lack of type 3 deiodinase (DIO3). Dio3–/– mice exhibited reduced neonatal viability on most genetic backgrounds and perinatal lethality on a C57BL/6 background. Dio3–/– mice exhibited severe growth retardation during the neonatal period and cartilage loss. Mice surviving after birth manifested brain and cranial dysmorphisms, severe hydrocephalus, choanal atresia, and cleft palate. These abnormalities were noticeable in C57BL/6J Dio3–/– mice at fetal stages, in addition to a thyrotoxic heart with septal defects and thin ventricular walls. Our findings stress the protecting role of DIO3 during development and support the hypothesis that human congenital abnormalities associated with hyperthyroidism during pregnancy are caused by transient thyrotoxicosis before clinical intervention. Our results also suggest thyroid hormone involvement in the etiology of idiopathic pathologies including cleft palate, choanal atresia, Chiari malformations, Kaschin-Beck disease, and Temple and other cranio-encephalic and heart syndromes.

Brain dysmorphisms and hydrocephalus in mice. 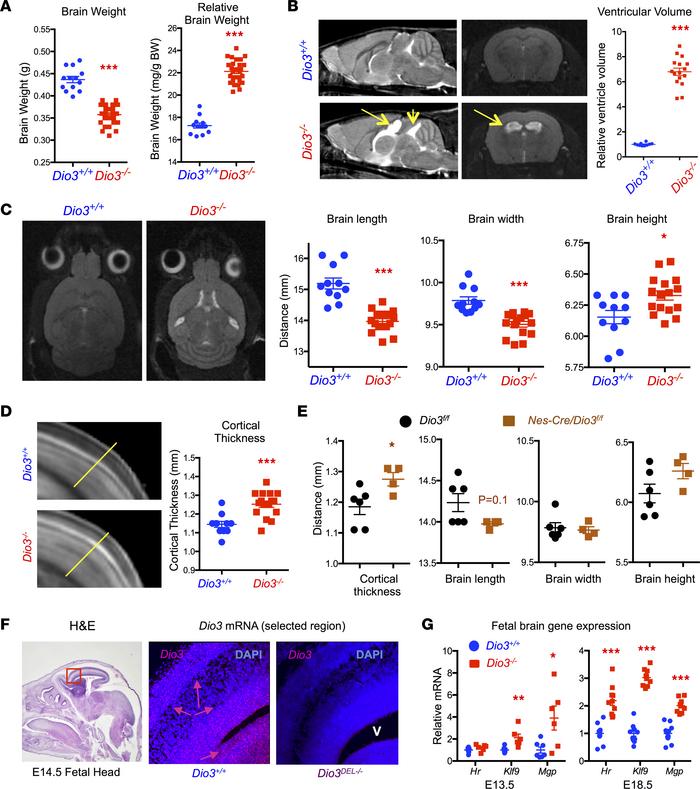