Puberty is associated with transient insulin resistance that normally recedes at the end of puberty; however, in overweight children, insulin resistance persists, leading to an increased risk of type 2 diabetes. The mechanisms whereby pancreatic β cells adapt to pubertal insulin resistance, and how they are affected by the metabolic status, have not been investigated. Here, we show that puberty is associated with a transient increase in β cell proliferation in rats and humans of both sexes. In rats, β cell proliferation correlated with a rise in growth hormone (GH) levels. Serum from pubertal rats and humans promoted β cell proliferation, suggesting the implication of a circulating factor. In pubertal rat islets, expression of genes of the GH/serotonin (5-hydroxytryptamine [5-HT]) pathway underwent changes consistent with a proliferative effect. Inhibition of the pro-proliferative 5-HT receptor isoform HTR2B blocked the increase in β cell proliferation in pubertal islets ex vivo and in vivo. Peripubertal metabolic stress blunted β cell proliferation during puberty and led to altered glucose homeostasis later in life. This study identifies a role of GH/GH receptor/5-HT/HTR2B signaling in the control of β cell mass expansion during puberty and identifies a mechanistic link between pubertal obesity and the risk of developing type 2 diabetes.

Puberty in female and male rats was associated with glucose intolerance and lower insulin sensitivity. 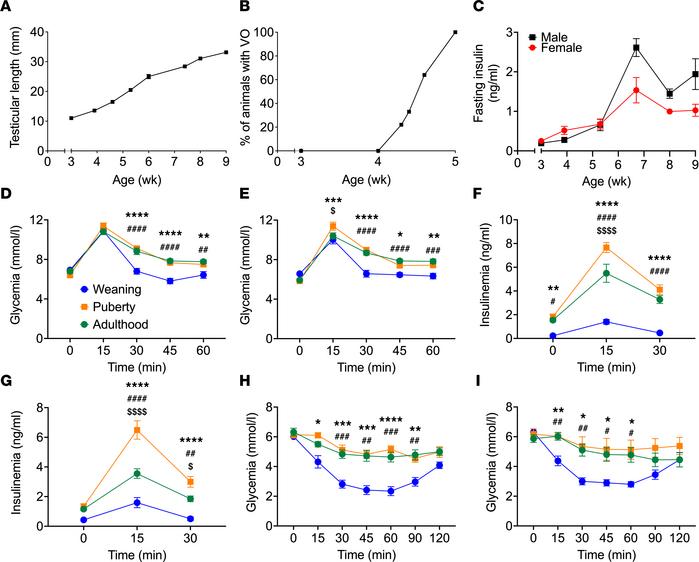