Dysregulation of excitatory amino acid transporter 2 (EAAT2) contributes to the development of temporal lobe epilepsy (TLE). Several strategies for increasing total EAAT2 levels have been proposed. However, the mechanism underlying the oligomeric assembly of EAAT2, impairment of which inhibits the formation of functional oligomers by EAAT2 monomers, is still poorly understood. In the present study, we identified E3 ubiquitin ligase AMFR as an EAAT2-interacting protein. AMFR specifically increased the level of EAAT2 oligomers rather than inducing protein degradation through K542-specific ubiquitination. By using tissues from humans with TLE and epilepsy model mice, we observed that AMFR and EAAT2 oligomer levels were simultaneously decreased in the hippocampus. Screening of 2386 FDA-approved drugs revealed that the most common analgesic/antipyretic medicine, acetaminophen (APAP), can induce AMFR transcriptional activation via transcription factor SP1. Administration of APAP protected against pentylenetetrazol-induced epileptogenesis. In mice with chronic epilepsy, APAP treatment partially reduced the occurrence of spontaneous seizures and greatly enhanced the antiepileptic effects of 17AAG, an Hsp90 inhibitor that upregulates total EAAT2 levels, when the 2 compounds were administered together. In summary, our studies reveal an essential role for AMFR in regulating the oligomeric state of EAAT2 and suggest that APAP can improve the efficacy of EAAT2-targeted antiepileptic treatments. 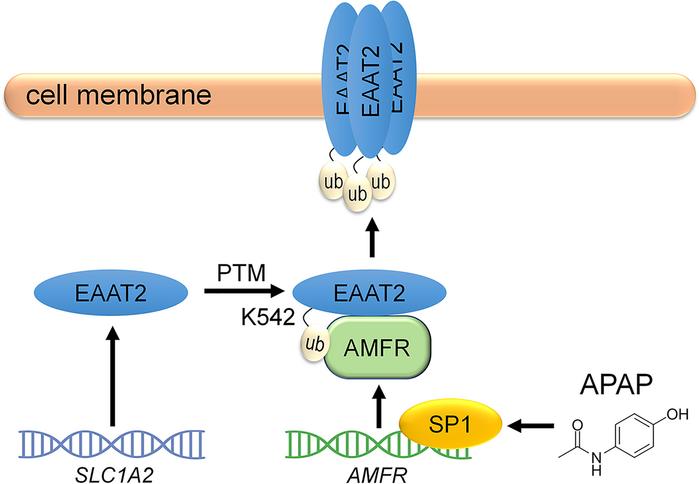