Pseudomonas aeruginosa undergoes diversification during infection of the cystic fibrosis (CF) lung. Understanding these changes requires model systems that capture the complexity of the CF lung environment. We previously identified loss-of-function mutations in the 2-component regulatory system sensor kinase gene pmrB in P. aeruginosa from CF lung infections and from experimental infection of mice. Here, we demonstrate that, while such mutations lowered in vitro minimum inhibitory concentrations for multiple antimicrobial classes, this was not reflected in increased antibiotic susceptibility in vivo. Loss of PmrB impaired aminoarabinose modification of LPS, increasing the negative charge of the outer membrane and promoting uptake of cationic antimicrobials. However, in vivo, this could be offset by increased membrane binding of other positively charged molecules present in lungs. The polyamine spermidine readily coated the surface of PmrB-deficient P. aeruginosa, reducing susceptibility to antibiotics that rely on charge differences to bind the outer membrane and increasing biofilm formation. Spermidine was elevated in lungs during P. aeruginosa infection in mice and during episodes of antimicrobial treatment in people with CF. These findings highlight the need to study antimicrobial resistance under clinically relevant environmental conditions. Microbial mutations carrying fitness costs in vitro may be advantageous during infection, where host resources can be utilized.

Spermidine is detectable in CF sputum. 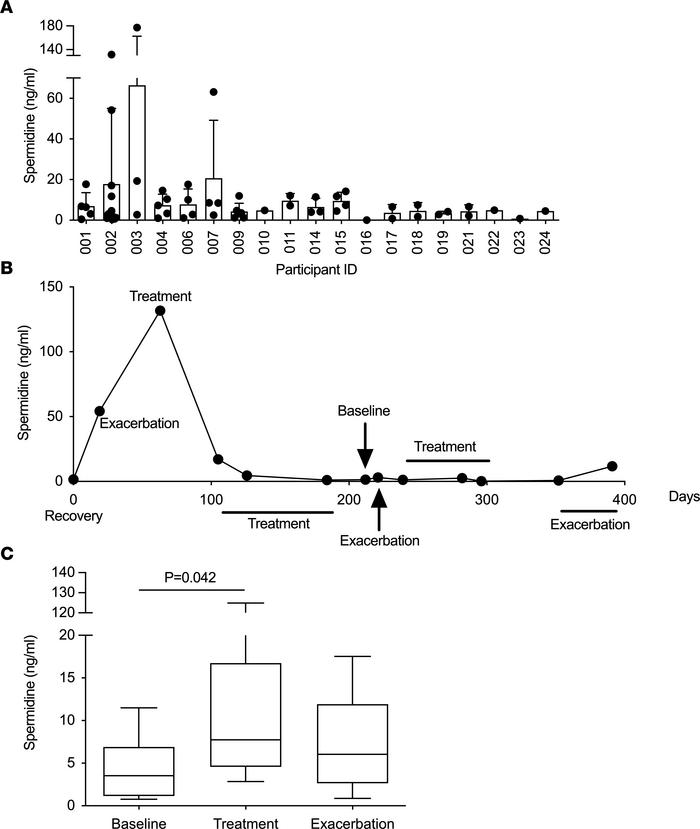 Concentration of spermidine in sputum from people with CF, chronically infected with . , determined by competition ELISA. () Spermidine levels in 19 study participants. Between 1 and 13 samples were available per participant. No 2 samples from the same participant were collected at the same visit ( = 65). Data are shown as mean ± SD. () Changes in spermidine abundance in sputum from a single participant over time. This participant received meropenem during the treatment phases and ceftazidime during exacerbation and recovery/maintenance. The individual was coinfected with MRSA and so received teicoplanin throughout. () Collected samples were defined as baseline, treatment, or pulmonary exacerbation, defined by participant clinical data. Participants received 2 or more drugs, including aztreonam, fosfomycin, colistimethate, meropenem, tobramycin, colomycin, ceftazidime, teicoplanin and tazocin, with individual patient antibiotic combinations chosen by their specialist clinician. Whiskers show the 10–90 percentile. Significance was determined by 1-way ANOVA, with Dunnett’s multiple comparison testing. Data are from a single experiment.