MICU1 expression is necessary for AT2 cell differentiation into AT1 cells during homeostatic tissue maintenance. 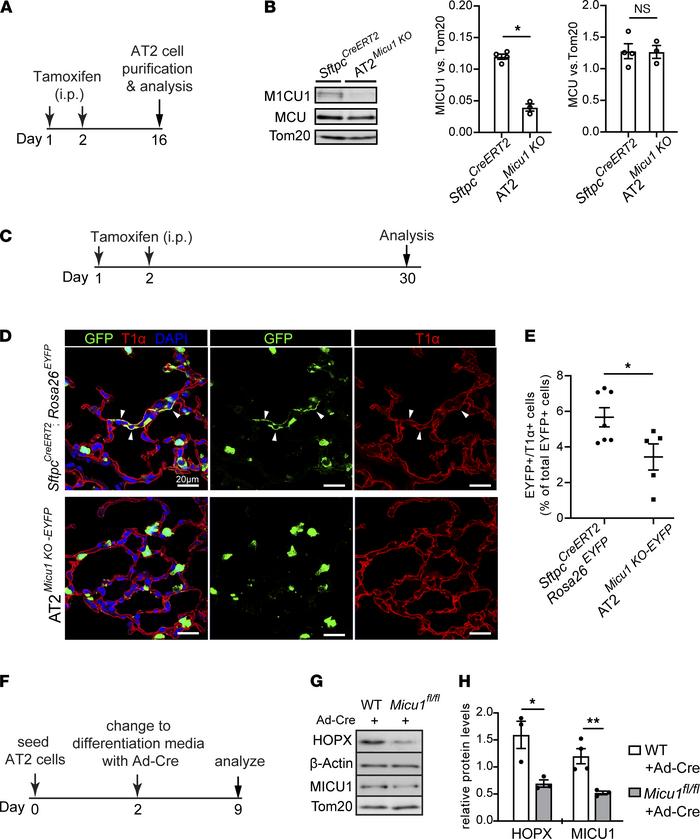 () Schematic of experimental design for studies performed in showing time line of tamoxifen treatment and AT2 cell harvest from adult mice. () Western blots of whole-cell protein from purified AT2 cells from and ; (AT2) mice. The graphs of fold change in the protein levels of MICU1 and MCU by Western blot are shown on the right. Band density was normalized to Tom20. () Schematic of experimental design for studies performed in and . () Confocal images of lung sections at 4 weeks after last dose of tamoxifen treatment, with antibodies to GFP (green) and T1α (red). GFP antibody was used to detect EYFP+ cells. The cell nucleus was stained with DAPI (blue). Arrows point to regions double positive for GFP and T1α. Scale bars: 20 μm. () Flow cytometry analysis of dissociated lung cells showing the percentage of EYFP+/T1α+ cells of total EYFP+ cells at 4 weeks after last dose of tamoxifen treatment. () Schematic of experimental design for studies performed in and . Purified AT2 cells from adult WT or mouse lungs were seeded on rat-tail collagen–coated plates. At day 2 of culture, AT2 cells were infected with Ad-Cre and treated with differentiation medium; they were examined at 7 days after differentiation (day 9 of culture). () Western blots of whole-cell protein from control (WT+Ad-Cre) and -deleted AT2 (+Ad-Cre) cells at day 9 of culture showing the expression of HOPX (an AT1 cell marker) and MICU1.Tom20 and β-actin were the mitochondrial loading control and total lysate loading control, respectively. () Densitometry chart showing relative protein levels of HOPX and MICU1. Band densities of HOPX and MICU1 were normalized to β-actin and Tom20, respectively. Data are presented as mean ± SEM. values were calculated using Student’s test. * < 0.05; ** < 0.01.