Inflammatory bowel disease (IBD) is a chronic illness characterized by dysregulated immune cascades in the intestines, in which the Th17 immune response plays an important role. We demonstrated that mice with intestinal epithelium–specific deletion of Krüppel-like factor 5 (Klf5) developed Th17-dependent colonic inflammation. In the absence of KLF5, there was aberrant cellular localization of phosphorylated STAT3, an essential mediator of the Th17-associated cytokine, IL-22, which is required for epithelial tissue regeneration. In contrast, mitigation of IL-17A with anti–IL-17A neutralizing antibody attenuated colitis in Klf5-deficient mice. There was also a considerable shift in the colonic microbiota of Klf5-deficient mice that phenocopied human IBD. Notably, the inflammatory response due to Klf5 deletion was alleviated by antibiotic treatment, implicating the role of microbiota in pathogenesis. Finally, human colitic tissues had reduced KLF5 levels when compared with healthy tissues. Together, these findings demonstrated the importance of KLF5 in protecting the intestinal epithelium against Th17-mediated immune and inflammatory responses. The mice described herein may serve as a potential model for human IBD. 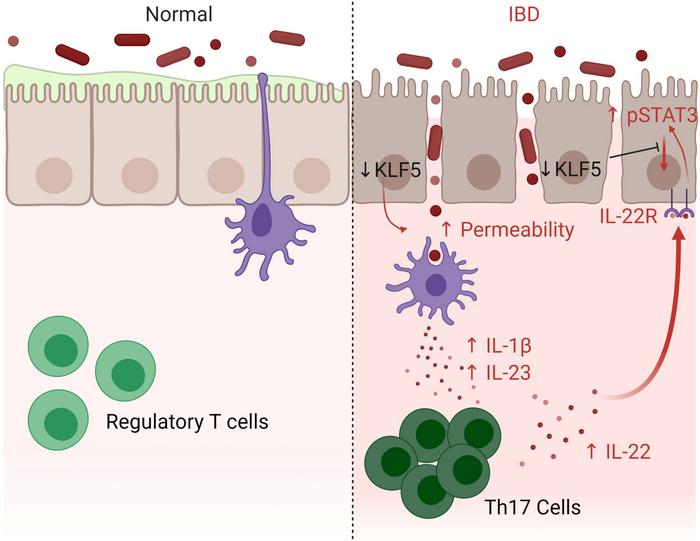