Immunoproteasomes regulate the degradation of ubiquitin-coupled proteins and generate peptides that are preferentially presented by MHC class I. Mutations in immunoproteasome subunits lead to immunoproteasome dysfunction, which causes proteasome-associated autoinflammatory syndromes (PRAAS) characterized by nodular erythema and partial lipodystrophy. It remains unclear, however, how immunoproteasome dysfunction leads to inflammatory symptoms. Here, we established mice harboring a mutation in Psmb8 (Psmb8-KI mice) and addressed this question. Psmb8-KI mice showed higher susceptibility to imiquimod-induced skin inflammation (IMS). Blockade of IL-6 or TNF-α partially suppressed IMS in both control and Psmb8-KI mice, but there was still more residual inflammation in the Psmb8-KI mice than in the control mice. DNA microarray analysis showed that treatment of J774 cells with proteasome inhibitors increased the expression of the Cxcl9 and Cxcl10 genes. Deficiency in Cxcr3, the gene encoding the receptor of CXCL9 and CXCL10, in control mice did not change IMS susceptibility, while deficiency in Cxcr3 in Psmb8-KI mice ameliorated IMS. Taken together, these findings demonstrate that this mutation in Psmb8 leads to hyperactivation of the CXCR3 pathway, which is responsible for the increased susceptibility of Psmb8-KI mice to IMS. These data suggest the CXCR3/CXCL10 axis as a new molecular target for treating PRAAS. 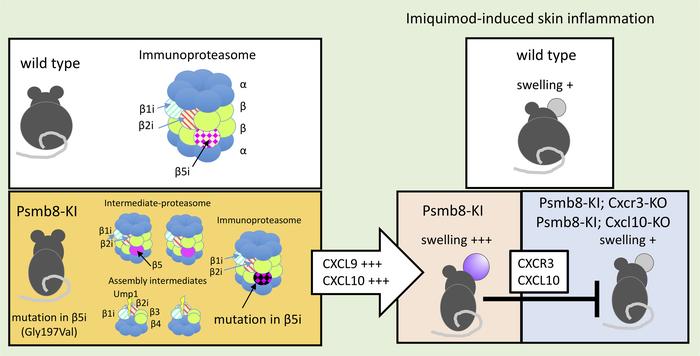