Secreted phospholipase A2-IIA (sPLA2-IIA) hydrolyzes phospholipids to liberate lysophospholipids and fatty acids. Given its poor activity toward eukaryotic cell membranes, its role in the generation of proinflammatory lipid mediators is unclear. Conversely, sPLA2-IIA efficiently hydrolyzes bacterial membranes. Here, we show that sPLA2-IIA affects the immune system by acting on the intestinal microbial flora. Using mice overexpressing transgene-driven human sPLA2-IIA, we found that the intestinal microbiota was critical for both induction of an immune phenotype and promotion of inflammatory arthritis. The expression of sPLA2-IIA led to alterations of the intestinal microbiota composition, but housing in a more stringent pathogen-free facility revealed that its expression could affect the immune system in the absence of changes to the composition of this flora. In contrast, untargeted lipidomic analysis focusing on bacteria-derived lipid mediators revealed that sPLA2-IIA could profoundly alter the fecal lipidome. The data suggest that a singular protein, sPLA2-IIA, produces systemic effects on the immune system through its activity on the microbiota and its lipidome. 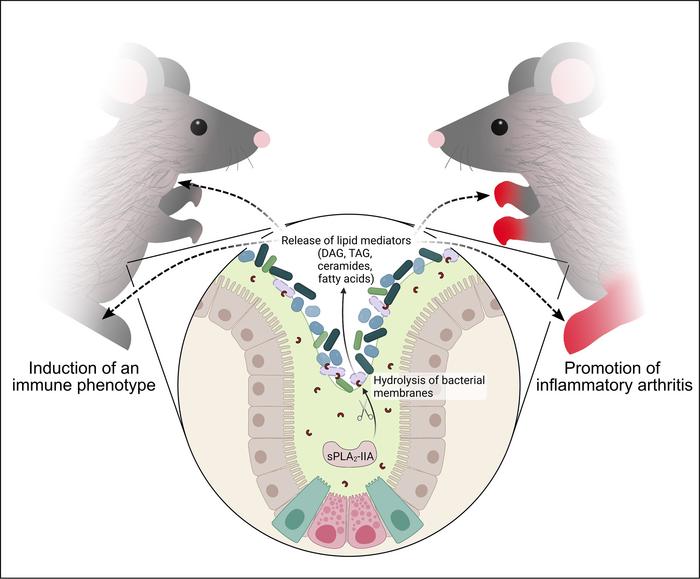