Besides promoting inflammation by mobilizing lipid mediators, group IIA secreted phospholipase A2 (sPLA2-IIA) prevents bacterial infection by degrading bacterial membranes. Here, we show that, despite the restricted intestinal expression of sPLA2-IIA in BALB/c mice, its genetic deletion leads to amelioration of cancer and exacerbation of psoriasis in distal skin. Intestinal expression of sPLA2-IIA is reduced after treatment with antibiotics or under germ-free conditions, suggesting its upregulation by gut microbiota. Metagenome, transcriptome, and metabolome analyses have revealed that sPLA2-IIA deficiency alters the gut microbiota, accompanied by notable changes in the intestinal expression of genes related to immunity and metabolism, as well as in the levels of various blood metabolites and fecal bacterial lipids, suggesting that sPLA2-IIA contributes to shaping of the gut microbiota. The skin phenotypes in Pla2g2a–/– mice are lost (a) when they are cohoused with littermate WT mice, resulting in the mixing of the microbiota between the genotypes, or (b) when they are housed in a more stringent pathogen-free facility, where Pla2g2a expression in WT mice is low and the gut microbial compositions in both genotypes are nearly identical. Thus, our results highlight a potentially new aspect of sPLA2-IIA as a modulator of gut microbiota, perturbation of which affects distal skin responses. 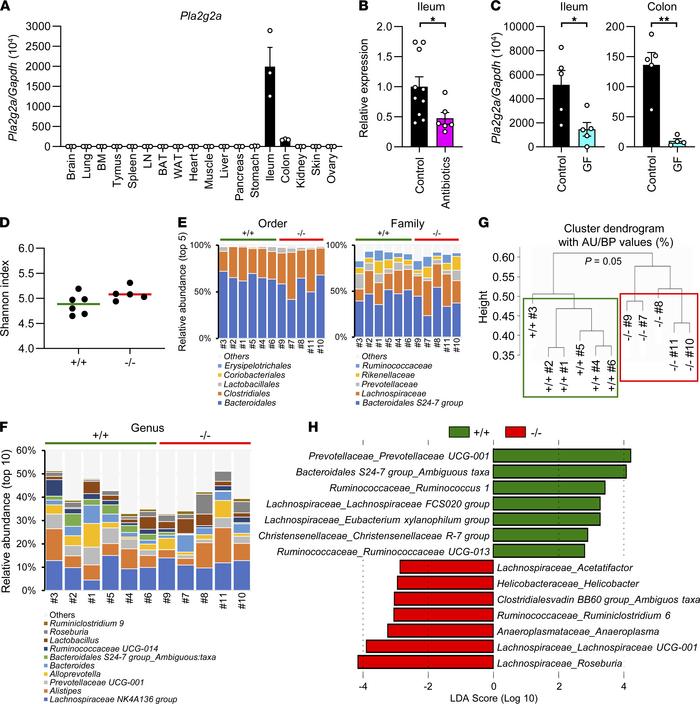