Nonphlogistic migration of macrophages contributes to the clearance of pathogens and apoptotic cells, a critical step for the resolution of inflammation and return to homeostasis. Angiotensin-(1-7) [Ang-(1-7)] is a heptapeptide of the renin-angiotensin system that acts through Mas receptor (MasR). Ang-(1-7) has recently emerged as a novel proresolving mediator, yet Ang-(1-7) resolution mechanisms are not fully determined. Herein, Ang-(1-7) stimulated migration of human and murine monocytes/macrophages in a MasR-, CCR2-, and MEK/ERK1/2–dependent manner. Pleural injection of Ang-(1-7) promoted nonphlogistic mononuclear cell influx alongside increased levels of CCL2, IL-10, and macrophage polarization toward a regulatory phenotype. Ang-(1-7) induction of CCL2 and mononuclear cell migration was also dependent on MasR and MEK/ERK. Of note, MasR was upregulated during the resolution phase of inflammation, and its pharmacological inhibition or genetic deficiency impaired mononuclear cell recruitment during self-resolving models of LPS pleurisy and E. coli peritonitis. Inhibition/absence of MasR was associated with reduced CCL2 levels, impaired phagocytosis of bacteria, efferocytosis, and delayed resolution of inflammation. In summary, we have uncovered a potentially novel proresolving feature of Ang-(1-7), namely the recruitment of mononuclear cells favoring efferocytosis, phagocytosis, and resolution of inflammation. Mechanistically, cell migration was dependent on MasR, CCR2, and the MEK/ERK pathway. 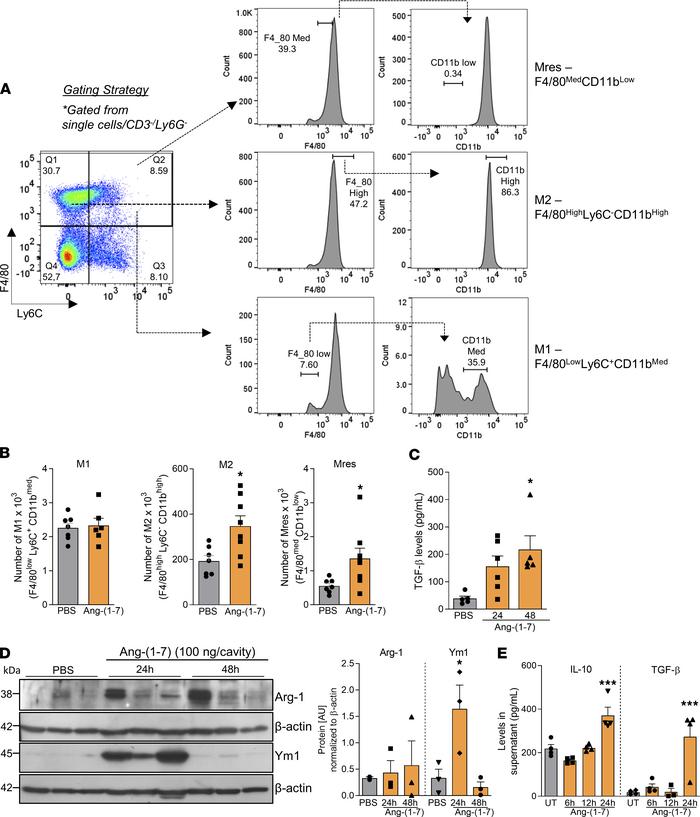 Briefly, BALB/c mice received an i.pl. injection of Ang-(1-7) (100 ng/cavity) or PBS (controls), and the macrophages recruited to the cavity were harvested at 48 hours for phenotyping by flow cytometry as shown in gating strategy (). () Graphs present the absolute numbers of M1 (F4/80loLy6C+CD11bmed), M2 (F4/80hiLy6C–CD11bhi), and Mres (F4/80medCD11blo) recruited into the pleura. TGF-β levels were assessed in the pleural lavage supernatant from Ang-(1-7)–injected mice at different time points postinjection (). Leukocytes recruited into the pleural cavity were processed for Western blot analysis of Arg-1 and Ym1 levels (). β-Actin was used as a loading control. During in vitro settings, the kinetics of production of IL-10 and TGF-β by BMDMs were evaluated (). Data are presented as mean ± SEM of 8 mice per group (in vivo) or are representative results of 3 independent experiments with BMDMs performed in biological quadruplicates ( = 4). Western blot quantification was performed using ImageJ software from the representative blots shown in , which used whole cell extracts from 3 mice. * for < 0.05 and *** for < 0.001 when compared with the control group (PBS) by test () or 1-way ANOVA ( and ).