BACKGROUND Naturally acquired immunity to malaria is incompletely understood. We used controlled human malaria infection (CHMI) to study the impact of past exposure on malaria in Kenyan adults in relation to infection with a non-Kenyan parasite strain.METHODS We administered 3.2 × 103 aseptic, purified, cryopreserved Plasmodium falciparum sporozoites (Sanaria PfSPZ Challenge, NF54 West African strain) by direct venous inoculation and undertook clinical monitoring and serial quantitative PCR (qPCR) of the 18S ribosomal RNA gene. The study endpoint was met when parasitemia reached 500 or more parasites per μL blood, clinically important symptoms were seen, or at 21 days after inoculation. All volunteers received antimalarial drug treatment upon meeting the endpoint.RESULTS One hundred and sixty-one volunteers underwent CHMI between August 4, 2016, and February 14, 2018. CHMI was well tolerated, with no severe or serious adverse events. Nineteen volunteers (11.8%) were excluded from the analysis based on detection of antimalarial drugs above the minimal inhibitory concentration or parasites genotyped as non-NF54. Of the 142 volunteers who were eligible for analysis, 26 (18.3%) had febrile symptoms and were treated; 30 (21.1%) reached 500 or more parasites per μL and were treated; 53 (37.3%) had parasitemia without meeting thresholds for treatment; and 33 (23.2%) remained qPCR negative.CONCLUSION We found that past exposure to malaria, as evidenced by location of residence, in some Kenyan adults can completely suppress in vivo growth of a parasite strain originating from outside Kenya.TRIAL REGISTRATION ClinicalTrials.gov NCT02739763.FUNDING Wellcome Trust.

Study design and volunteer eligibility and enrollment for CHMI. 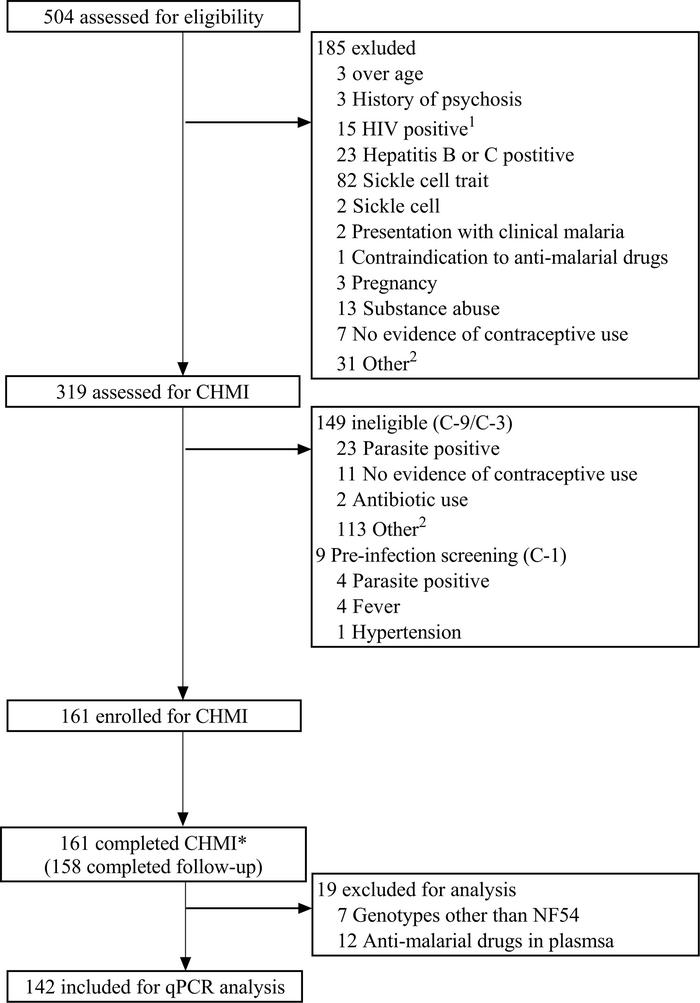 1One volunteer was both HIV and hepatitis B positive. 2Volunteers were assessed in the fourth quarter of 2017 but were not enrolled for CHMI due to national security reasons. *Volunteers were deemed to have completed CHMI if they had received endpoint treatment. qPCR outcomes are presented for 142 volunteers after exclusions for parasite genotype and antimalarial drug levels.