Antipsychotics often cause tardive dyskinesia, an adverse symptom of involuntary hyperkinetic movements. Analysis of the US Food and Drug Administration Adverse Event Reporting System and JMDC insurance claims revealed that acetaminophen prevented the dyskinesia induced by dopamine D2 receptor antagonists. In vivo experiments further showed that a 21-day treatment with haloperidol increased the number of vacuous chewing movements (VCMs) in rats, an effect that was inhibited by oral acetaminophen treatment or intracerebroventricular injection of N-(4-hydroxyphenyl)-arachidonylamide (AM404), an acetaminophen metabolite that acts as an activator of the transient receptor potential vanilloid 1 (TRPV1). In mice, haloperidol-induced VCMs were also mitigated by treatment with AM404 applied to the dorsal striatum, an effect not seen in TRPV1-deficient mice. Acetaminophen prevented the haloperidol-induced decrease in the number of c-Fos+preproenkephalin+ striatal neurons in wild-type mice but not in TRPV1-deficient mice. Finally, chemogenetic stimulation of indirect pathway medium spiny neurons in the dorsal striatum decreased haloperidol-induced VCMs. These results suggest that acetaminophen activates the indirect pathway neurons by activating TRPV1 channels via AM404. 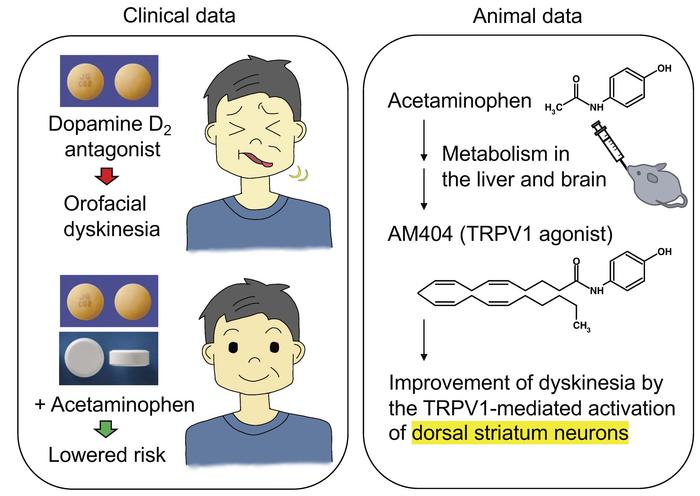