Spinocerebellar ataxia type 1 (SCA1) is an adult-onset neurodegenerative disorder characterized by motor incoordination, mild cognitive decline, respiratory dysfunction, and early lethality. It is caused by the expansion of the polyglutamine (polyQ) tract in Ataxin-1 (ATXN1), which stabilizes the protein, leading to its toxic accumulation in neurons. Previously, we showed that serine 776 (S776) phosphorylation is critical for ATXN1 stability and contributes to its toxicity in cerebellar Purkinje cells. Still, the therapeutic potential of disrupting S776 phosphorylation on noncerebellar SCA1 phenotypes remains unstudied. Here, we report that abolishing S776 phosphorylation specifically on the polyQ-expanded ATXN1 of SCA1-knockin mice reduces ATXN1 throughout the brain and not only rescues the cerebellar motor incoordination but also improves respiratory function and extends survival while not affecting the hippocampal learning and memory deficits. As therapeutic approaches are likely to decrease S776 phosphorylation on polyQ-expanded and WT ATXN1, we further disrupted S776 phosphorylation on both alleles and observed an attenuated rescue, demonstrating a potential protective role of WT allele. This study not only highlights the role of S776 phosphorylation to regulate ATXN1 levels throughout the brain but also suggests distinct brain region–specific disease mechanisms and demonstrates the importance of developing allele-specific therapies for maximal benefits in SCA1.

Disruption of S776 phosphorylation reduces ATXN1[2Q] levels in the cerebellum, brainstem, and hippocampus. 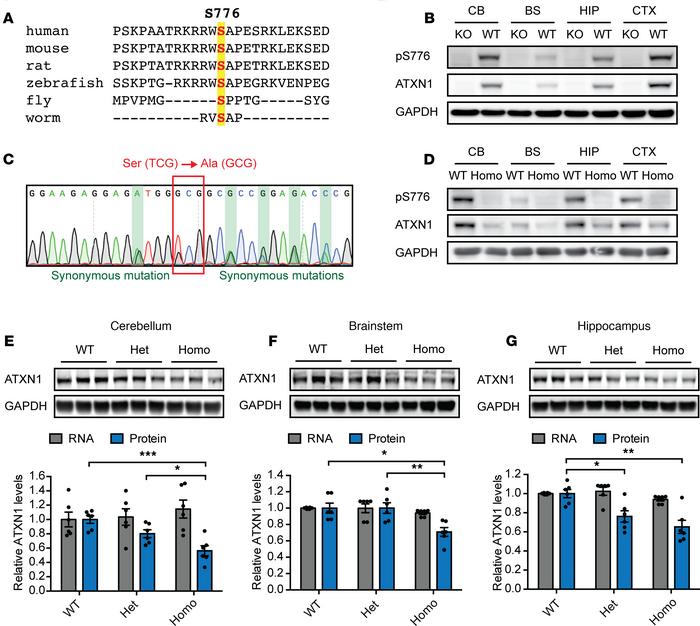