NDUFS3 expression and complex I deficiency. 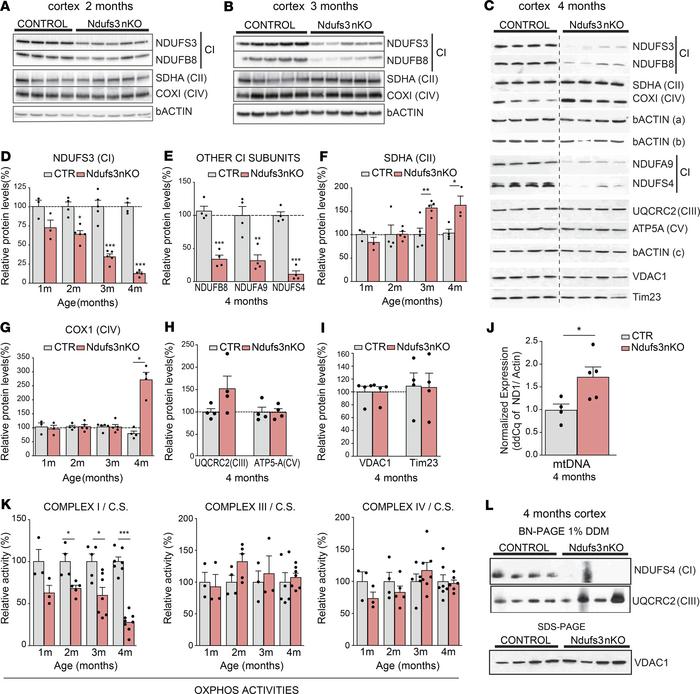 (–) Western blots of cortex homogenates of control (CTR) and nKO male mice at different ages (2, 3, and 4 months, respectively) using antibodies against NDUFS3, NDUFB8, NDUFA9, and NDUFS4 (complex I subunits); SDHA (complex II subunit); UQCRC2 (complex III subunit); COX1 (complex IV subunit); ATP5A (complex V subunit); and VDAC1, Tim23, and β-actin [β-actin (a) for NDUFS3, SDHA, and NDUFS4; β-actin (b) for NDUFB8 and COXI; β-actin (c) for NDUFA9 and ATP5A; and β-actin (d) for UQCRC2, VDAC1, and Tim23]. The dashed line in indicates that the gel image was cropped to remove lanes not relevant to the analysis. (–) Quantification of the Western blots in –. Data are represented as mean ± SEM ( = 4–5/group). values were determined by Student’s test. () mtDNA levels measured by RT-PCR in DNA extracted from cortices of 4-month-old control and nKO male mice ( = 4–5/group). () Spectrophotometric complex I/citrate synthase, complex III/citrate synthase, and complex IV/citrate synthase activity ratios were measured in cortex homogenates from 1-, 2-, 3-, and 4-month-old male mice. Complex I activity in nKO animals was decreased in comparison with that in control mice. Data are represented as mean ± SEM ( = 3–8/group). values were determined by Student’s test. () Steady-state levels of complex I and III measured by BN-PAGE in homogenates from cortices of control and nKO mice at 4 months of age using antibodies against NDUFS4 (complex I) and UQCRC2 (complex III) subunits and relative mitochondrial content (Western blot of the same homogenates using antibody against VDAC1). * < 0.05, ** < 0.01, *** < 0.001