Hepatocellular death contributes to progression of alcohol–associated (ALD-associated) and non–alcohol-associated (NAFL/NASH) liver diseases. However, receptor-interaction protein kinase 3 (RIP3), an intermediate in necroptotic cell death, contributes to injury in murine models of ALD but not NAFL/NASH. We show here that a differential role for mixed-lineage kinase domain–like protein (MLKL), the downstream effector of RIP3, in murine models of ALD versus NAFL/NASH and that RIP1-RIP3-MLKL can be used as biomarkers to distinguish alcohol-associated hepatitis (AH) from NASH. Phospho-MLKL was higher in livers of patients with NASH compared with AH or healthy controls (HCs). MLKL expression, phosphorylation, oligomerization, and translocation to plasma membrane were induced in WT mice fed diets high in fat, fructose, and cholesterol but not in response to Gao-binge (acute on chronic) ethanol exposure. Mlkl–/– mice were not protected from ethanol-induced hepatocellular injury, which was associated with increased expression of chemokines and neutrophil recruitment. Circulating concentrations of RIP1 and RIP3, but not MLKL, distinguished patients with AH from HCs or patients with NASH. Taken together, these data indicate that MLKL is differentially activated in ALD/AH compared with NAFL/NASH in both murine models and patients. Furthermore, plasma RIP1 and RIP3 may be promising biomarkers for distinguishing AH and NASH. 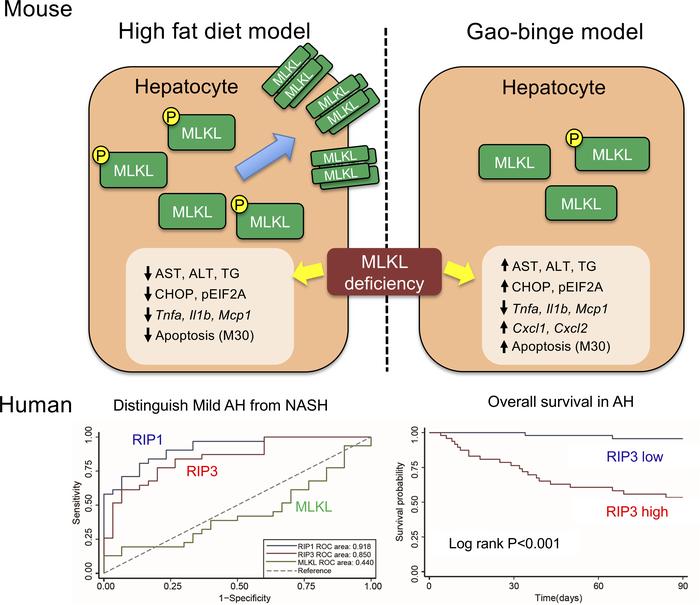