In recent years, a number of drugs have been approved for the treatment of cystic fibrosis (CF). Among them, newly released Trikafta, a combination of 3 drugs (VX-661/VX-445/VX-770), holds great promise to radically improve the quality of life for a large portion of patients with CF carrying 1 copy of F508del, the most frequent CF transmembrane conductance regulator (CFTR) mutation. Currently available disease-modifying CF drugs work by rescuing the function of the mutated CFTR anion channel. Recent research has shown that membrane lipids, and the cell lipidome in general, play a significant role in the mechanism of CFTR-defective trafficking and, on the other hand, its rescue. In this paper, by using untargeted lipidomics on CFBE41o- cells, we identified distinctive changes in the bronchial epithelial cell lipidome associated with treatment with Trikafta and other CF drugs. Particularly interesting was the reduction of levels of ceramide, a known molecular player in the induction of apoptosis, which appeared to be associated with a decrease in the susceptibility of cells to undergo apoptosis. This evidence could account for additional beneficial roles of the triple combination of drugs on CF phenotypes.

Score plot for PLS-DA analysis of CFBE41o- cells lipidome after treatment with drugs or control DMSO. 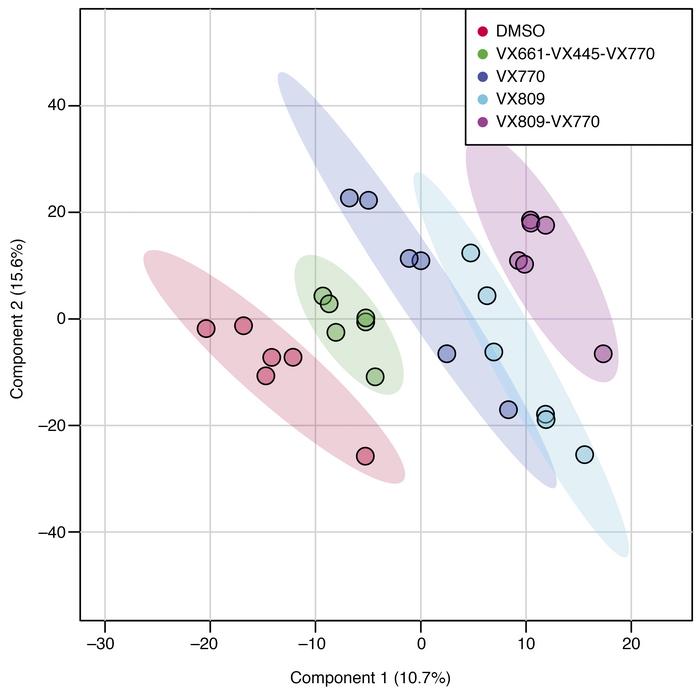 Blank and QC groups are omitted for clarity.